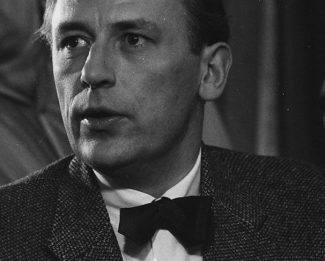 Actor 1922-1990
Amateur actor discovered by Bergman in the early 1940s, Johanson appeared in close to 40 Bergman productions on stage and screen.

Born Ulf Olav Johanson in Stockholm in 1922, Johanson took a keen interest in the theatre from an early age, and whilst pursuing acting studies in Stockholm he was discovered by Ingmar Bergman. Johanson had his stage debut in 1941 in Bergman's staging of A Midsummer Night's Dream. He continued his studies at the Gösta Terserus Acting School and during the war, at the Åbo Swedish Theatre.

Johanson's stage career played out, to a great extent, under Ingmar Bergman's direction, first at the Helsingborg City Theatre in the mid-1940s and at the Malmö City Theatre during the 1950s. After time spent at a number of other city theatres, Johanson joined the Royal Dramatic Theatre in 1964, where he once again worked with Bergman. The Royal Dramatic Theatre served as Johanson's permanent base for the rest of his career.

A few of his more noteworthy performances were as the cook in Mother Courage, Pozzo in Waiting for Godot, the leading role in Bengt Bratt's Föreståndaren and the role of Tobias Rap in Bergman's much-lauded Twelfth Night in 1975.

Johanson worked with Bergman in close to 40 productions, including 10 films: from Bergman's directorial debut Crisis to Face to Face 30 years later. He rarely played the leading man, but nevertheless filled numerous supporting roles. Some of the more noteworthy include Curator Heerbrand in Hour of the Wolf, the doctor in Shame and the priest in The Magic Flute.

Although Johanson was an actor who rarely stole the limelight and played more supporting than leading roles, he did win a variety of Swedish acting awards and scholarships throughout his career.

In his final major film role, in Gunnel Lindblom's Summer Nights on the Planet Earth in 1987, Johanson displayed qualities as an actor that he had not previously fully developed.

The previous year, he performed in his final Bergman production, playing Polonius in the Royal Dramatic Theatre staging of Hamlet.

Ulf Johanson passed away on 15 February 1990 in Stockholm.