Death of Punch is about an actor who suddenly and unexpectedly gets a visit from two stern men dressed in black, who turn out to be the messengers of death. Both the theme itself and whole sections of dialogue are clearly a precursor of The Seventh Seal. 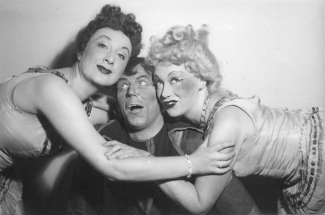 'The piece is an audacious plagiarism of Strindberg's Punch's Shrove Tuesday and The Old Play of Everyman, a fact that did not embarrass in the slightest.'
Ingmar Bergman

Death of Punch marks Ingmar Bergman's debut as a dramatist. It was written during the period in which he was active in the Stockholm Student Theatre, and the premiere took place on the Students Union stage on 24 September 1942. It was Claes Hoogland, the head of the theatre, who recruited Ingmar Bergman to the Student Theatre, a step up for Bergman in his theatre career.

At the time, the Stockholm Student Theatre had achieved a certain reputation, and was not regarded as a purely amateur theatre, but more as 'the forecourt of professional theatre, a few steps above other amateur theatres', as Claes Hoogland wrote in 1984. At the Student Theatre, Bergman had access to actors with a certain professional experience, some of whom were even trained at the Royal Dramatic Theatre School of Drama. Bergman stayed with the group for one year.

Several critics found it hard to determine what Bergman wanted to say with the play, discerning influences from various sources. Sten Selander in Svenska Dagbladet saw parallels with the plays of both Strindberg and Pär Lagerkvist. But he also acknowledged that the young Bergman himself had a good deal of potential.

Others who saw parallels with Strindberg and Lagerkvist were not so complimentary. Herbert Grevenius wrote in Stockholms-Tidningen that, 'Twenty five years ago this kind of work was called expressionism and we thought that Lagerkvist had had the last word with such consummate masterpieces as Den svåra stunden and Himlens hemlighet. But perhaps it will become modern again, (in which case), Dear Lord, preserve us from the fury of the Norsemen.'

Kusoffsky in Aftonbladet described Death of Punch as 'a rather motley product with roots both in mystery plays and modern expressionism [---] but [it] also contains scenes that show that it is written by a true theatre spirit with a need to express himself in thought-provoking images'.

Even though Ingmar Bergman the dramatist provoked mixed reactions, many felt that Ingmar Bergman the director was a promising talent. Selander felt that 'no debut in Swedish drama for a good many years has provided such unequivocal promise for the future'. Further on, he wrote, 'The dialogue throughout the play is handled with a sure touch and a genuine feel for what is natural, and the writer clearly has an imagination, for which the stage is the natural vehicle, something to which his inventive and fertile direction also bears witness'. Nils Beyer in SD also recognised a promising talent in this debut, describing how it had been 'a dazzling theatrical experience, a piece so well adapted to the stage that it would be impossible to read and perhaps impossible to stage for anyone other than the writer himself. Therein lay the most astounding aspects of this production'.