This production was designed for Swedish high schools, with a great deal of emphasis put on slapstick elements focusing round Sganarelle who fled into the audience - both a traditional feature present in 17th-century versions of the play and a typical Bergman ploy to engage a young, unsophisticated audience. 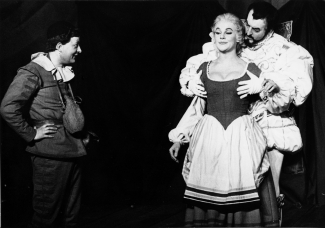 Bergman's second staging of Molière's play was more comical than the first, most likely due to the young audience it was presented to. Critical response was positive.