Bergman kicked off his German exile with his third production in 14 years of Strindberg's A Dream Play, translated into German by Peter Weiss. 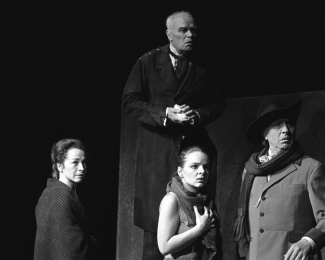 'In this variation on his Stockholm production, Ingmar Bergman dried out Strindberg's river of tears.'
Georg Henzel, Frankfurter Allgemeine Zeitung

Bergman's German production of A Dream Play used the same approach as his 1970 Royal Dramatic Theatre production. The poet sitting at his desk opened the play and presented it as a product of his imagination. At the end he remained alone on an empty stage. The approach anticipated such subsequent Bergman works as After the Rehearsal and Faithless, where his fictional self was to appear as a dreamer fantasizing about his own story.

Expecting a production that capitalized on the drama's metaphysical, surreal, and dreamlike qualities, the German critics who knew Bergman primarily as a filmmaker with a penchant for metaphysics were surprised by his realistic and text-oriented production and by mise-en-scene they ignored the rich imagery of Strindberg's play. German critics were used to reading the play in such a light: 'Bergman should have taken us further into the surrealism of dreams.' Although no critical success, Bergman's first staging in Munich was greeted with overwhelming applause by an audience paying tribute to their guest director, with a total of 34 curtain calls and with Bergman making a rare appearance on stage together with the ensemble.