The problems of a sparsely populated area and lambing are the subjects of Bergman's first documentary. 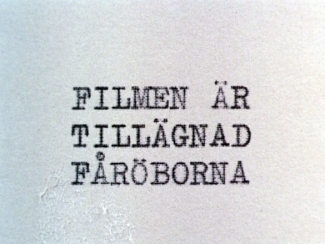 "He, Bergman, has spoken up for the inhabitants of Fårö, and said most of the things that need to be said, in my opinion. Everyone should be allowed to have their say. Like the business with the slaughterhouse."
Verner Larsson, sheep farmer on Fårö

Fårö Document is Ingmar Bergman's first documentary. Having recently built a house on the island in the Baltic he was taken by the people who lived there and felt the need to document their everyday lives. The film was shown on Swedish television to great acclaim. Ten years later Bergman would make a follow-up: Fårö Document 1979.

In my opinion, Ingmar Bergman's documentary about Fårö definitely ranks among his best films. Not thanks to any remarkable stylistic devices; on the contrary – because it was so straightforward and close to its subject. Bergman has not only dedicated the film to the inhabitants of Fårö, his film was actually a declaration of love for the island and its people. But more important: by depicting their lives so clearly and methodically, Bergman was able to speak up for sparsely populated areas* in a powerful way via concrete and immediate examples.

His ultimate petition for the people he interviewed in the film lay in his disinclination to blow his own trumpet.

One cannot, of course, ignore the fact that this film is of some cinematic interest, quite simply because this is Ingmar Bergman's first venture into documentary filmmaking and because he is portraying the island to which he has escaped from the pressure of his own fame, the island he has used in his latest films.

But the Fårö he showed us was not interesting just because of Bergman. He proved himself  hardly surprisingly  to be an excellent reporter. [...]

One might find it liberating as I believe Bergman himself also found the experience  to see him depart so utterly from himself, using his enormous skill as a filmmaker to delineate, portray and defend a way of life that is under such threat in modern Sweden. In may ways a society such as this tiny one off the coast is a marginal phenomenon, isolated from change. But in the growing debate about regional planning, Bergman's film enters the fray with some vivid subject matter, and asking important questions.

The sparing use of background scenery, images of the coastline and its rock formations, the beach with its dead forest and the deserted houses, was quite sufficient to paint the picture in full. In an exquisite sequence of images, almost archaic in tone, he showed us lambing out in the fields, the ewe in labour turning her nose up in the air, then licking her offspring clean. There were certain points of emphasis of this kind that pointed to their originator, so to speak.

Yet this was no romanticising of the sparsely populated areas. Bergman observes that the people here live under difficult, scant and often uncertain conditions. Those who wish to do so, and to sacrifice certain modern conveniences for other qualities, should be given the opportunity to do so as long as the resources of society in general can support them.

(Bergman) said all this with convincing warmth and candour.

*Sweden being such a large country geographically, there are many areas with very low populations. Population decline in rural areas has long been a subject of intense debate in Swedish regional policy and politics. These areas have a special name in Swedish  "glesbygden"  literally "the sparsely populated areas".