“Farce intended for film,” reads the subtitle to this absurd story about Joakim, who catches a fish who grants him three wishes. 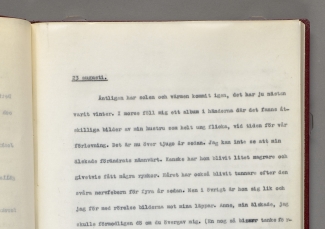 After murdering his wife’s lover, Joakim is sentenced to death, but escapes when the guillotine malfunctions. His final wish is then fulfilled: to regress to a foetus in the womb of his lover. The protagonist is the same as in Joakim Naken, but the story also bears similarities to Sawdust and Tinsel, where Frost tells Albert about a dream in which he became smaller and smaller, ultimately becoming an embryo in Alma’s belly before disappearing altogether.

The Fish on stage