[On The Ghost Sonata]

Bergman on Strindberg’s drama, during his second production of the play. 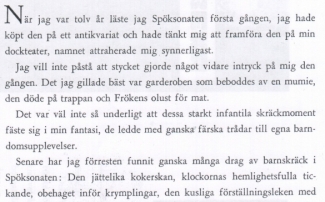 “My favourite parts were the wardrobe inhabited by a mummy, the dead man on the stairs, and the cook’s distaste for food.”

In the programme to his second production of the play, Bergman recounted his earlier experiences with Strindberg’s drama, as well as his reaction to Olof Molander’s rendition of the play at Dramaten in 1942. Bergman writes that he was twelve years old when he read The Ghost Sonata for the first time: “I had purchased it at a second-hand bookstore and was intent on performing it with my puppet theatre. The name attracted me in particular.” Yet it was other things that captured his interest: “My favourite parts were the wardrobe inhabited by a mummy, the dead man on the stairs, and the cook’s distaste for food.” He goes on to describe his first staging of the play, with Gunnar Björnstrand in the role of The Colonel. He was satisfied with his production, which was a certain success, and “the fragile ensemble was borne up as if by a wave of the drama’s enormity.” However:

But then came the great and all-destroying incident: Molander’s staging at Dramaten the year after. Never before has a cockerel choked on his exultation with such force as I did that night, and it was during the dark and rainy trudge home over Djurgården that I decided to leave the theatre business and follow my honourable parents’ wishes: my continued studies. What I’d experienced that night at the theatre to me seemed absolute and inimitable – and it still does.

Molander’s productions of Damascus, The Dream Play and The Ghost Sonata still stand as three paragons, and their importance as exemplars and standards cannot be measured. What Molander has granted to us younger directors will likely never be fully appreciated, but regardless of whatever foreign role models we may have had through the years, we must recognise that it was Molander who was in fact our greatest teacher.

It can be said that this evening’s performance is a love child. My endeavour at Medborgarhuset is the mother, Molander’s Ghost Sonata is the father, and the child – well, the child naturally takes after both of its parents, but is no mere copy. Quite the opposite: he has undeniably blazed his own trail.

My only hope is that the father will want to acknowledge his offspring.