I Have My Doubts about the Film School

Bergman expresses his support for the Swedish Cinemateket, and pushes for a more lenient system at the film school. 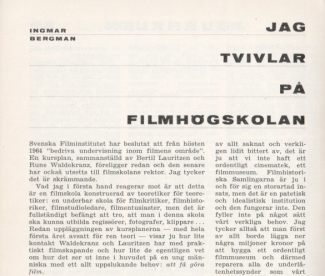 What we – people interested in film, and filmmakers alike – have wanted most of all, and indeed suffered bitterly for lack of, is the existence of a proper cinematheque, a film museum.

As you can see, Bergman didn’t hold academic film studies in overly high regard:

My primary problem is the fact that this is a film school constructed by theoreticians, for theoreticians: a wonderful place for film critics, film historians, film studio managers, and film enthusiasts. But it is absolutely ridiculous to believe that the same school will be able to educate directors, cinematographers, editors. Right from the structure of the courses – with the entire first year reserved for pure theory – you can see how little contact Waldekranz and Lauritzen have with actual filmmaking, and how little they actually know about what’s going on in the head of a young person with a single all-consuming desire: to make film.

Do they think that the practical side just takes care of itself, just because they’ve managed to drag themselves through a few semesters of dismal theory?

What we – people interested in film, and filmmakers alike – have wanted most of all, and indeed suffered bitterly for lack of, is the existence of a proper cinematheque, a film museum.

For example, consider the following: in the syllabus to the film school, it’s written that the students should have so and so many hours of lectures covering the subject of Classical Montage Techniques. What utter nonsense. Maybe a nascent Mauritz Edström would be interested in that kind of thing, but for a pre-Antonioni it would hold no interest whatsoever. While the viewing of Battleship Potemkin would enrich his knowledge, if only tangentially, the details of how the staircase sequence was edited would only concern him if he happened to be interested in just that particular scene. And in that case, the only thing he should do is watch it himself.

I have a passion to see film, experience film – but without all the excesses of theory. I want to have them as stimulants, impressions, playthings, suggestions.