Bergman’s acceptance speech after receiving the Goethe Prize in 1976, where he discusses the humanistic, psychological and professional underpinnings of artistic practice. 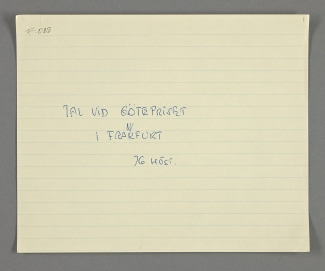 The text, published only in German, begins with an explanation of the circumstances behind his move to Germany:

On the fourteenth of June this year, I received a permit allowing me to live and work in your country. On the fifteenth of September, in the studios of Bavaria Film, I will start shooting my first film outside of Sweden. From the middle of February, I will be reprising Strindberg’s Dream Play at the Rezidensteatern in Munich. Today, I am here to receive the city of Frankfurt’s Goethe Prize – an honour that has touched me deeply. To think: here I stand, 58 years of age, and take my first steps into a cultural circle that has directly and indirectly been of tremendous importance to my development as an artist and human being. I come from a land that I love and that I never thought I would leave – at least not of my own accord. Being as it may, while my exodus may seem voluntary from the outside, internally it was an irresistible compulsion.