“Film script based on the synopsis ‘Sentimental Journey’” 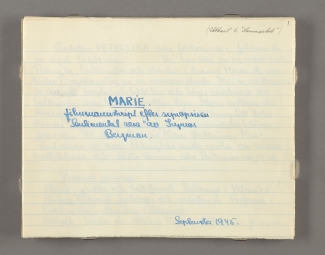 Not much became of this script at first, but it would come to form the basis for Summer Interlude a few years later.

The ballet PETRUSHKA appearing in the film is a Russian ballet by [an empty space has been reserved here]. It’s about three puppets: Petrushka, the Ballerina, and the villain of the piece, The Moor. By day, they perform at a puppet theatre. But at night, they secretly come alive, and become rivals for the Ballerina’s affections, who cannot choose between them. The Moor then murders Petrushka during a performance, to the audience’s great delight, and the puppeteer’s despair. So it happens that the Moor gets the Ballerina. But in the final scene, Petrushka’s spirit appears near the ceiling of the puppet theatre. It seems the Ballerina will hardly live happily ever after.