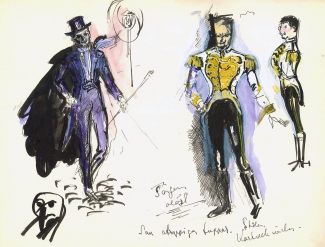 'The Merry Widow is like a wonderful old kerosene lamp. One must be careful not to put electric lights in it. It has to be treated with care and must not be modernized.'
Ingmar Bergman

In the early 1970s Barbra Streisand asked Bergman to make a film version of the operetta, with her in the leading role. Bergman wrote a synopsis, but a film never came out of it.

Bergman's operetta production was a huge public success and changed his image as a theatre director. Up to then, his work had been associated with dark dramatic subjects. That he would bother to produce an operetta took reviewers by surprise, but they were delighted at the humour and ironic touch of The Merry Widow; where Bergman's angst had been 'replaced by a spurting joie de vivre'.

What excited the critics the most was Bergman's upgrading of a popular middle-class form of entertainment to a refined and sophisticated theatre art.