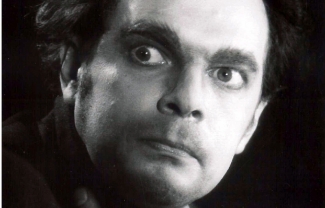 Actor 1917-1979
Expressive stage actor with a distinctive acting style and diction, Pawlo was a familiar face and voice in Bergman's stage and radio productions of the 1950s.

Toivo Pawlo was born in London, England, on 25 December 1917, and came from an artistic family, with father George Pawlo working as an opera singer and engineer, whilst mother Eva Pawlo gave singing lessons and worked as an operetta singer. Toivo was involved with the theatre during his time at Norra Latin secondary school in Stockholm, and first applied to the Royal Dramatic Theatre's acting school early on, where his young age kept him from being accepted. At the age of 17, he asked Gösta Ekman if he could trail along on their tour. Ekman suspected that Pawlo had what it took to become an actor and offered him his debut role in Kanske en diktare.

Between 1936-39, Pawlo studied at the Royal Dramatic Theatre's acting school and immediately after was employed there for a short time. He then went on to act on a number of various stages, including the Gothenburg City Theatre (1940-41), Vasa Theatre in Stockholm (1942), Dramatist's Studio in Stockholm (1943-44), Swedish National Touring Theatre summer tours (1943-47), Malmö City Theatre (1959), and at the Stockholm City Theatre from 1960. He eventually returned to the Royal Dramatic Theatre in 1969.

Pawlo's early film roles often involved wishy-washy, emotionally complicated youths, as when he played Raskolnikov in Hampe Faustmann's version of Crime and Punishment, or as the grammar school student in melodramatic Ungt Blod. He went on to play more authoritative figures, including the police chief in Bergman's The Magician or as the criminal diplomat in Arne Mattsson's The Yellow Car from 1963. He acted in some 30 films, rarely taking the leading role but nonetheless filling each role with intensity and meaning.

Rather than being the leading star who expressed himself with grand gestures, Pawlo was a more reflective and fervent actor, although he proved his skills as a grand comedian, transforming into the tragi-comedic jester. This became truly apparent in his roles as Uncle Vanya and Galileo Galilei, or in one of his final film roles as the grievous father in Hello Baby, for which he received a Guldbagge in 1976.

Toivo Pawlo's first marriage was to artist Kerstin Hedeby, and he was later married to artist Amie Lindblad. His daughter is Rebecka Pawlo. Toivo Pawlo passed away in Stockholm on 14 June 1979.