Directed by Kenne Fant (Ingmar Bergman's input into the screenplay was anonymous). 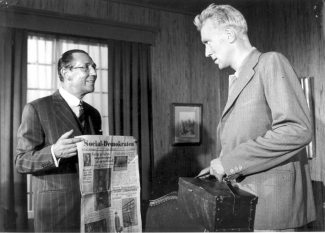 "You could have filmed a corrugated tin roof here in Stockholm. You don't need to travel to Dalarna for that."
Ingmar Bergman

In an article by Torsten Jungstedt for the Swedish radio and television magazine Röster i Radio/TV (no. 21, 1976) Kenne Fant talks about preparing the screenplay for The Minister of Uddarbo:

Rune Lindström and I wrote the screenplay in consultation with Axel Hambræus. But it was very important that Ingmar Bergman's contribution should be anonymous. He read the (original) novel, ran through my screenplay and remarked ironically: 'You could have filmed a corrugated tin roof here in Stockholm. You don't need to travel to Dalarna for that.'
What Ingmar meant was that I had stripped away the setting from the scene and concentrated only on close-ups, because that was my thing at the time. I felt rather ashamed and started to put back some of the distance shots into to screenplay. Ingmar was amazingly helpful when it came to other directors, and he would give up much of his spare time for things that he neither got paid for nor learnt from', Fant adds.