'Death is no liberator,' wrote Bergman in the programme notes for his amateur debut, in which he also played a part as death's henchman. 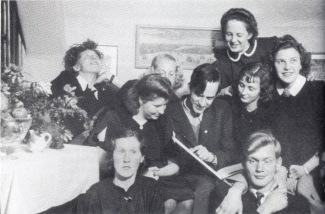 'The director Ingmar Bergman, who takes the lion's share of honours for this undeniable success, gave a somewhat original yet highly assured portrayal of the Comptroller/Judge'
Gunnar Ollén in SFP

'In 1938 the Mäster Olofsgården theatre took a giant leap forward. MO had the good fortune to come into contact with the 19-year-old Ingmar Bergman, a university student in Stockholm at the time, who attended Martin Lamm's lectures on Strindberg. Bergman immediately conceived a desire to be a director in the theatre. He had, however, no practical experience of working with the theatre other than from his own puppet theatre.'

In the 1980s, Sven Hansson, one of the driving forces behind Mäster Olofsgården in Stockholm's Gamla Stan (Old Town), described how his meeting with the teenage Ingmar Bergman at Sandberg's Bookshop on the corner of Sturegatan and Humlegårdsgatan, was a crucial development for the group's theatrical endeavours. The shop was owned and run by Erland Josephson's father Gunnar, and one of the assistants in the shop was Erland's older brother, Carl Olof. Bergman was in the habit of going there, looking through the books and talking about the theatre. According to Bergman himself, the meeting took place when Hansson noticed the kind of books Bergman was interested in, and asked him if he would like to join the MO group's theatre section. Since the head of the section had recently resigned, Bergman was asked if he would like to take over the whole thing. As Hansson observed, Bergman had been keen on puppet theatre up until he graduated from high school, but his experience of ordinary theatre was limited to sitting in the audience.

After sitting just two examinations for Martin Lamm, Bergman gave up university and his parental home for Mäster Olofsgården. Even though Bergman's parents were unhappy, there were extenuating circumstances in that Mäster Olofsgården was part of a Christian charity. Sven Hansson became both mentor and father-figure to Bergman, who moved in for a spell with Hansson and his wife in Gamla Stan in 1939.

The amateur ensemble had started rehearsing another play when Bergman took over and suggested Outward Bound. Bergman described his entrance as follows.

It was a forlorn group that the former leader had left behind. There's a stupid expression about falling in on a banana skin. That's what I did. The fact that I was suddenly standing there as a director was a fluke. Talk about luck.

Bergman had seen the play before with his father at Stockholm's Comedy Theatre in 1931 and had been terrified. Prior to the Mäster Olofsgård production, he had been trying to stage the play in his puppet theatre for two years, without success. In Mäster Olofsgården's monthly magazine, SFP, Bergman presented the play as follows.

I have chosen Outward Bound as the most suitable from a subject matter point of view. And one can, without exaggeration, also claim that it lacks nothing in dramatic power, intensity and excitement.

In the programme for the production Bergman wrote,

Personally I have been involved with the play for two years, more or less intensively.

Vane had, according to Bergman, 'seen much trouble and suffering. He is a person who has thought a lot and read a lot. [...] He has contemplated suicide. Why can't I take my own life, put a stop to the headaches and eternal wanderings? A revolver to the temple and then the end... But we cannot be supposed to gain our own entry to eternity. How do we dare to be so high-handed that we ourselves venture to determine the meaning of our lives?'

According to Sjögren, Bergman saw the Hamlet theme as central to the drama. 'The young couple in Outward Bound turned on the gas in their tiny kitchen. They wanted calm and assurance. Their sentence was terrible: An endless wandering in uncertainty.' The director's presentation of the drama as a Christian mystery play worked well to publicise the venue in which it was to be performed, the City Mission's Church Hall at the Grill building, Stortorget 5.

The level of interest, under the circumstances, shown in this 20-year-old's amateur debut was high. In the audience on the opening night were not only Bergmans but other lofty members of the local clergy, and also Gabriel Alw, the actor from the Royal Dramatic Theatre, Dramaten. Only a handful of reviews of the production remain, including one lengthy piece in the group's own monthly magazine, in which it was declared the best production of the year. Of the actors, Sture Djerf, who would later turn professional and maintain his links with Bergman for many years, was singled out for praise. Bergman himself gained more attention for his directing than for his acting role (he was not even named in the cast list) and a reviewer with the pseudonym Sand, writing in Stockholmstidningen, remarked that 'it was a sound amateur performance! The play is a difficult one, extremely difficult for amateurs, but it seldom failed to make its mark on the audience.'

Gunnar Ollén in SFP was also enthusiastic, full of praise for Bergman both as director and actor.

The director Ingmar Bergman, who takes the lion's share of honours for this undeniable success, gave a somewhat original yet highly assured portrayal of the Comptroller/Judge who reckons up the passengers' credits and debits.

Even though it was a difficult play to stage, Bergman appears to have carefully adapted it to the acting resources at his disposal, and audience reactions were boundlessly enthusiastic. However, one controversial element of the mise-en-scene was the fact that Bergman used the church pulpit as a bar, since it was cemented into the floor and could not be moved. Otherwise, it appears in many ways to have been a typical amateur theatre production, complete with a pole that squeaked each time the curtain was raised or lowered.