Pages from a Non-Existent Diary

In a talk that was possibly never given, Bergman describes his views on filmmaking. 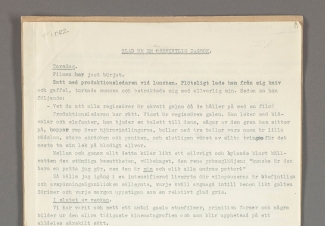 “A director is like an organist seated at a gigantic organ, and the notes are in the script.”

The style at least is reminiscent of Bergman’s other (relatively few) lectures from this period:

So far, we make our films in a partially automated fashion, constricted by economic factors, routine, lack of imagination, and consequently a sense of suspicion towards anything that seems experimental.

I have a definite feeling that we have only been playing with the pinkie finger of a giant - a colossus who slumbers yet in the darkness, of whom I can on occasion catch a brief but dizzying glimpse.

A director is like an organist seated at a gigantic organ, and the notes are in the script. The organ is made up of innumerable connections, pedals, pipes, stops et cetera. But they’re not labelled “Flûte” or “Principal” or “sixteen-footer,” but Photographer, Objective, Film, Architect, Laboratory, Clipper, Electrician, Actor, Makeup Artist, Composer, Mixing and so forth in a never-ending series.

In order to play this organ, one needs two things above all: know-how and stamina. Inspiration is good, too, but it’s nothing to depend on. On the contrary, it should be treated with distrust.

Film is a one-man undertaking just as much as it is a collaborative effort: everyone is collectively dependent on the capabilities of everyone else, even though the notes themselves – the script – have ultimate importance.