The People of Värmland

The first of two productions Bergman directed of F A Dahlgren's popular play, this time in which the radio adaption was produced along with famous Swedish author Vilhelm Moberg. 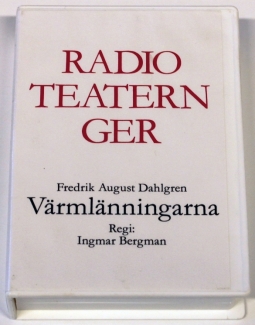 The piece, a musical drama from the 1800s which was traditionally aired around Christmastime in Sweden, received mixed reviews regarding Bergman's direction. The play takes place in Värmland, a province in central Sweden, and Bergman used a dialect coach to train the actors in the correct accents. Some critics found it artificial; others praised the local dialect.

An anonymous listener described Bergman as an 'image magician and experimentalist', and Sven Stolpe in Aftonbladet found it 'quick, instigating and skillful', with cinematic scenes.

This two-act musical drama, with text by Fredrik August Dahlgren (1816-95) and music primarily by Andreas Randel, premiered at the Stockholm Royal Opera in 1846. Amongst the 20 or so parts, the lovers Erik (tenor) and Anna (soprano) are the most memorable. He is a student and son of lay assessor Stor-Sven, whilst she is the daughter of the small farmer Jan-Hans. After a number of embroilments, the couple destroy their parents' wills and are together in the end. The People of Värmland has been staged annually in Sweden in Arvika (since 1927) and Ransäter (since 1953).