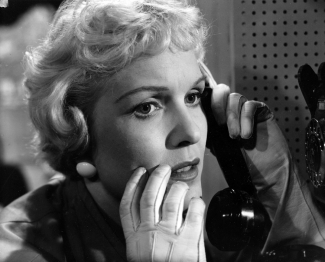 Given the epithet 'Battleship Femininity' by Ingmar Bergman, this stately, witty and sophisticated blonde actress and writer excelled in the director's comedies of the 1950's.

'I could not have been taught a better lesson. At that moment the basis of trust, security, ease and professionalism between us was founded. A steady bedrock for comedies, not least of all in Smiles of a Summer Night.'
Bergman on how Dahlbeck taught him to stage comedies during the filming of A Lesson in Love

Born 8 March 1920 in Stockholm, Sweden, as a child Dahlbeck dreamed of becoming a dancer. Her interests began to shift and she begun cultivating her literary interests at a young age, reciting poetry at school. After completing school, Dahlbeck worked in a music shop and as a clerk at The National Board of Health and Welfare before eventually enrolling at the Gösta Terserus Acting School. After an initial rejection, she was accepted to the Royal Dramatic Theatre Acting School in 1941. After her studies, she was employed at the Royal Dramatic Theatre between 1944 and 1964, and also taught stage production at the Acting School between 1957 and 1964.

Dahlbeck had her screen debut in 1941, when she was still a student, in Det sägs på stan and the following year was involved in Gustaf Molander’s classic Ride Tonight! At the outset of her career she was cast in distinctive motherly and peasant female roles, due to her blonde hair and noble appearance, including in Alf Sjöberg’s Only a Mother, which she considered to be her biggest film role and one of the few that she was willing to approve of afterwards. During this time, she also acted in a number of femme-fatale roles, for example in Two Women. After her breakthrough in Brita i Grosshandlarhuset in 1946, she acted in over 50 films. At the Royal Dramatic Theatre, she played noteworthy stage roles around the same time, including as the frivolous young lady in Stig Dagerman’s The Man Condemned to Death and as the mute Miss Y in Strindberg’s The Stronger.

Her stage success was due in part to her spicy wit and intelligent manner, enabling her to control the stage in a rather self-confident way. This allowed her free rein over the roles she played for Ingmar Bergman, who was full of admiration for her, even calling her ‘Battleship Femininity’.

Dahlbeck and Bergman first worked together in the unsuccessful staging of The Three-Penny Opera, with Dahlbeck playing Pirate Jenny, but Dahlbeck really came into her own in Bergman’s 1950’s comedies. Her most memorable roles include the comedy acts with Gunnar Björnstrand in the classic lift scene in Waiting Women and Smiles of a Summer Night.  In Images: My Life In Film, Bergman explained how Dahlbeck and Björnstrand were the ones to teach him about staging comedy.

Their interplay in the lift scene in Waiting Women inspired a full-blown comedy, A Lesson in Love. In an almost burlesque-style moment, Eva attempts to hang herself. Meanwhile, Gunnar professes his love to her. The roof collapses and the whole thing is incredibly funny. When it came time to film the act, I got cold feet. I told Eva and Gunnar that I had read through the text and it was just unworkable. It was dull, poorly written and that we would have to approach this scene from a different angle. Eva and Gunnar disputed me with a single voice. They asked me to leave the studio, to head out into town and get into some trouble. Let us play around with this for an hour. Then we’ll act out the scene for you when we are ready.

So the day progressed. And I suddenly understood, Aha, this is how it’s done! I could not have been taught a better lesson. At that moment the basis of trust, security, ease and professionalism between us was founded. A steady bedrock for comedies, not least of all in Smiles of a Summer Night.

Dahlbeck received as much praise for her filmic depiction of actress Desirée Armfeldt in Smiles of a Summer Night, where with bitter sarcasm and in complete control, she invites her male suitor to a hearty duel. Dahlbeck was also able to delve into more spiritually profound roles than those offered by the frivolous chamber plays. In Dreams she played a disillusioned, melancholic fashion executive, and for her colloquial role in Brink of Life, she was awarded a best actress award at Cannes along with Bibi Andersson, Barbro Hiort af Ornäs and Ingrid Thulin.

However, Dahbleck was critical of her film roles and felt that it was troublesome to play such pragmatic characters. In 1964 she quit the theatre and pursued a literary career at the same time that her husband (Colonel Sven Lampell) was appointed flotilla leader in Söderhamn. From this point on she acted in a handful of films and TV productions, and was awarded a Guldbagge in 1965 for her role in The Cats. Her film career reached its absolute conclusion in 1970, with her final role in Tintomara.

From then on she exclusively devoted her time to writing, with a dozen or so novels after her 1955 debut with ‘Dessa mina minsta’. Even before this time, when she was still acting on a regular basis, she was a diligent writer and published in various genres, including vaudeville literature with ‘Kar de Mumma’, a poetry collection published under the pseudonym Lis Edvarson in 1963, as well as writing the filmscript to Yngsjömordet in 1966.

Paracelsus Award for her authorship (1998)

The Nordic Drama Prize for her play Dessa mina minsta (1955)