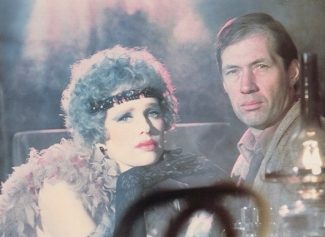 [...] "there is literally one hell of a vitality in Ingmar Bergman's exile film that stems from clear-sightedness, experience and rage."
Lasse Bergström in Expressen

Ingmar Bergman writing on the less than happy circumstances surrounding the beginnings of the project in Images: My Life in Film:

I played on and put together a screenplay for The Serpent's Egg while the lawyers had meetings, the problems were played down, and conversations with the tax authorities were inititated. I was calm, but the jail was deceptive. On January 26, 1976, the tax police came and picked me up. We had just finished editing and mixing Face to Face. [...] I had begun rehearsing Strindberg's Dance of Death at the Royal Dramtic Theater, and finally, the screenplay for The Serpent's Egg was complete. But everything was already wrong. The creative work had been disturbed. I imagined being able to use a situation that was not yet usable. I let the creativity rush in to help as if it were a doctor, nurse, and ambulance, all at once.

There followed the breakdown and the breaking up of camp. Quite by chance I ended up in Germany with my German film. I had an offer from Dino Laurentiis, who saw The Serpent's Egg as a seductive project. I was able to negotiate a sizable director's fee since I, for the moment, was a "bankable" name with Cries and Whispers, Scenes from a Marriage, and The Magic Flute under my belt.

I found in an old issue of Simplicissimus from 1923 a suggestive charcoal drawing of a heavily trafficked Berlin street in wintry twilight. Though we had been scouting in Berlin and other nearby citier for suitable locations, no place could match the street in that drawing. To top it off, it was magically named Bergmannstrasse. Through tough negotiating I managed to talk the producer into building the whole street scene complete with streetcar tracks, backyards, crossing alleys, and domed portals on the lot of Bavaria Studios. The cost was astronomical, but I was giddy with feverish enthusiasm. The Bergmannstrasse came out of the same madness as A Dream Play did, caused by my high blood pressure and hypertension. Warnings bells were ringing, but I refused to hear them.

My wife Ingrid and I went to United States to find an actor for the male lead, Abel Rosenberg. First, I asked Dustin Hoffman if he would play Abel. He studied the script and offered a thoroughly intelligent interpretation, but when push came to shove he admitted that he didn't feel he was right for the part and withdrew, assuring me that it would have been fun to work together. Then I met Robert Reford in Berverly Hills. He was friendly and positive but informed me that he could not see himself playing a Jewish circus performer. I had great respect for both Redford and Hoffman, but unfortunately, I did not see it as a warning sign that both of them pulled away.

Next I turned to Peter Falk, whom I considered a very fine actor. He was positive about the part; but for very different reasons, not the least of which were contractual, finally he, too, felt by the wayside. Even in this thorny dilemma, Dino Laurentiis was utterly loyal and did not give up. In an emergency meeting he came up with another actor, Richard Harris. Once more all warning signals stopped flashing in my head; I was consumed with bringing The Serpent's Egg to fruition.

Richard Harris was soaking in a huge water tank on Malta where he was finishing a film about a crazy captain and his love story involving a giant whale. Dino de Laurentiis had had the water tank specially constructed for the filming, and Harris spent most of his time fully immersed. From there came his message that he would enjoy playing the part and working with me. [...] Dino de Laurentiis called me to say that Richard Harris had contracted pneumonia from some kind of amoeba bacteria in the water tank in Malta, and a long convalescence was expected. We had to find someone else.

At this point the name of David Carradine was mentioned as a possibility. Dino sent me a copy of Carradine's latest film, which I viewed next day. It was the story of a country singer and enchanted me. One of the Carradine clan, David Carradine had an exciting look and sang with heartfelt musicality. He reminded me of the Swedish actor, Anders Ek, and the thought that God's finger had finally pointed to right Abel Rosenberg took hold on me.

Two days later Carradine arrived in Munich. We were finally ready to begin. But when I met him for the first time, Carradine seemed absent-minded and a bit strange. To help him get into the right frame of mind for this film, we launched the shooting with a viewing session of two classic Berlin movies: Mutter Drausens Fahrt ins Glück and Ruttmann's Berlin - die Symphonie der Grosstadt. The minute the lights in the theater went out, Carradine fell asleep, snoring loudly. When he woke up I had no chance to discuss his role with him. Carradine's behavior repeated itself during the filming. He was right owl and kept falling asleep on the set. He was found slumped just about everywhere, sound asleep. At the same time he was hard-working, punctual, and well prepared. Because of this, among other factors, we finished the film within our planned time schedule. I was pleased, to say the least, and very proud of our accomplishment. I also nourished considerable hope for a positive reaction.

It didn't hit me until much later – The Serpent's Egg was a substantial failure. I made myself immune to the rather tepid reaction from the critics. I remained optimistic, refusing to see the film what it was. After the film release, my life began to calm down; then I painfully realized the serious extent of my failure. Still, I do not regret for a moment making The Serpent's Egg; it was a healthy learning experience.

Given the film's reputation as an absolute turkey fuelled in no small part by Bergman's own self-deprecations it comes as something of a surprise to discover that the contemporary Swedish reviews were actually rather positive.

No matter. Ingmar Bergman's first film made abroad has a power that does not derive from speculation or distorted vision, but from simplicity and its physical watchability. It aims at the middle ground and hits the spot. Franz Josef Strauss, who is juggling some serpent's eggs down in Munich, should perhaps for safety's sake be given a couple of free tickets to the West German premiere. As per the domestic policy motto: lead us not into temptation.

He shines as a horror film director, turning the film's climax into an unremitting assault on the nerves. This is no mean feat from Bergman the Swede, and David Carradine and Liv Ullmann play their drowning couple with sensitivity and assurance, assisted by Gert Fröbe's splendid monster of a policeman. The problem is that it all gets a little too much of a good thing, a little too much spurting blood and polished violence as entertainment. If Bergman wants to warn us about our own serpent's eggs – which he probably does – perhaps scaring people out of their wits is not a good way to go about it.

It may sound like a film that is as black as night. There are no discernible smiles, and Bergman really is not joking when he says that he has made his first horror film: deep inside the nightmare dwells evil itself, a kinsman of Doktor Mabuse, the early German cinema's premonition of what was to come. But the power of its execution masks the darkness of its vision: there is literally one hell of a vitality in Ingmar Bergman's exile film that stems from clear-sightedness, experience and rage. In the world of art these are glowing qualities  they illuminate The Serpent's Egg, making it a masterpiece among films.

The opening of The Serpent's Egg is masterly. The contrast between poverty and luxury, between the depths of depression and a hectic life of pleasure is portrayed with a tremendous power of suggestion that precludes naivety, conveying a cohesive feel of the inferno with an overall impression of sickness. The film's weakness becomes apparent when Heinz Bennent appears as the cynical Professor Vergérus. In the true spirit of a spy thriller, mystery is heaped on mystery, leading via endless Kafkaesque corridors to the chamber where human experiments are carried out. Here it is that, by looking through the shell of the egg, one can divine the reptile's future birth. Perhaps there is no greater task for a filmmaker than to depict the origin of evil. One can confidently declare that Ingmar Bergman has made a creditable attempt, but I am not sure that he is a truly accomplished embryologist.

Ingmar Bergman's The Serpent's Egg follows a week in the life of Abel Rosenberg, an out-of-work American circus acrobat living in poverty-stricken Berlin following Germany's defeat in World War I. When his brother commits suicide, Abel seeks refuge in the apartment of an old acquaintance Professor Vergérus. Desperate to make ends meet in the war-ravaged city, Abel takes a job in Vergérus' clinic, where he discovers the horrific truth behind the work of the strangely beneficent professor and unlocks the chilling mystery that drove his brother to kill himself.