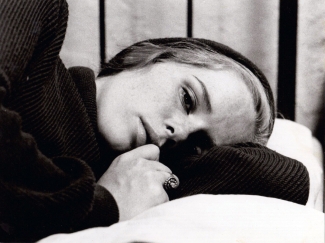 'When I decide to portray a part, I can never completely hide who I am, what I am. At the point of identification, the audience encounters a person, not a role, not an actress. A face to face.'
Liv Ullmann

Born Liv Johanne Ullmann on 16 December 1938 in Tokyo. Her father Viggo was an international aircraft engineer, hence her childhood spent in Tokyo (which her family left upon Japan's alliance with Germany in 1940), Toronto and New York. Following an accident, Viggo Ullmann died in New York in 1944, and when the War ended in 1945 Liv's mother Janna moved with her two daughters home to Trondheim. Liv was seven years old when she first set foot in Norway.

After a period of study at the Webber-Douglas Academy in London, Liv Ullmann made her stage debut in Stavanger in Anne Frank's Diary (roughly the same time that Harriet Andersson was playing the same part in Stockholm). Her film debut came in Fjols til fjells in 1957. Following a number of promising film and stage roles in Norway, Liv Ullmann came to Sweden to make her breakthrough film Persona, and remained in the country as Ingmar Bergman's partner for five years. She played major roles in his films up until Autumn Sonata in 1978, including Hour of the Wolf, Shame, A Passion, Cries and Whispers, and Scenes from a Marriage.

Liv Ullmann met Bergman via Bibi Andersson, whom Ullmann had got to know during the shooting of Bjarne Henning-Jensen's Short is the Summer. One crucial reason for landing the part in Persona was her physical similarity with Andersson, and she became the first non-Swede to play a major part in a Bergman film. In the same year that the film had its premiere (1966), Bergman and Ullmann's daughter Linn was born.

Liv Ullmann played Kristina in Jan Troell's film version of Vilhelm Moberg's emigrant novels The Emigrants and The New Land, a role for which she in 1973 won a Golden Globe and was nominated for an Oscar. Her subsequent fortune outside Scandinavia with films such as the comedy 40 Carat, or as Queen Kristina in The Abdication was somewhat less sparkling.

From time to time Liv Ullmann has returned to the theatre. She played the role of Eliza in Pygmalion alongside Erland Josephson at Maxim in Stockholm in 1975 and enjoyed considerable success in Noël Coward's comedy Private Lives in Oslo in 1989. Her role in Richard Rodgers musical I Remember Mama on Broadway in 1979 was, however, less highly acclaimed.

In the 1980s Ullmann became a goodwill ambassador for UNICEF. Her debut as a film director came in 1982 with Parting, one of the films in the Canadian episode film Love. She continued her role as a director through the 90s with Sofie, Kristin Lavrandsatter (a role she had previously played on the stage), Private Confessions and Faithless, the latter two films based on screenplays by Ingmar Bergman. In 2003 she also repeated her celebrated role as Marianne in Scenes from a Marriage in Saraband.

Liv Ullmann has also written two autobiographical works Changing (1976) and Choices (1984). She was the editor of the collection Letters to my Grandchild (1997). She has been married twice, first to the Norwegian doctor Gappe Stang between 1960–65 and since 1985 to the American property developer Donald Saunders.

Of her strong personal involvement with her roles she has commented:

When I decide to portray a part, I can never completely hide who I am, what I am. At the point of identification, the audience encounters a person, not a role, not an actress. A face to face. It's what I know about women. It's what I have experienced, what I've seen. That's what I want to share with you.