This double bill of Munthe seems to have been the least successful of Bergman's productions at Sagoteatern, which Bergman blames on his use of adult actors in a production meant to be acted by children. 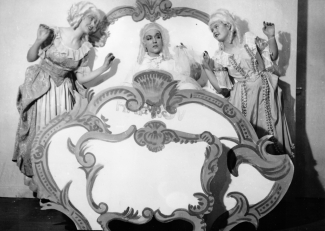 'Whatever the outcome of tonight's experiment, this experience has been a deep source of joy for all of us, and even if we do not overcome the difficulties, we will at least master them.'
Ingmar Bergman

Some children did perform in the production, including Gittan Söderlund, who played an aimable Little Red Riding Hood later the same year.

The motivation behind Bergman's dismal foreword in the programme notes was an apparent fire inspection that the theatre had undergone. This inspection led to restrictions being put on the theatre, including the tearing down of both the props and make-up rooms, and only 10 people being allowed on stage simultaneously.