[Speech on the aesthetics of film, and its conditions]

Draft for a lecture at Lund University. 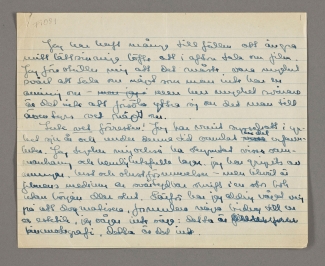 “I’ve had many chances to regret my offhand promise to speak about film this evening.”

The speech that was actually held was in turn published as The Making of Film, but this earlier draft is so different that we have presented it here as a separate text.

One should consider cinematography itself, the elementary principle for the reproduction of motion on the screen: observe the perforated strip, consisting of fifty-two small squares per meter, separated from one another by dashed lines. The shift in motion from frame to frame is incredibly small, even during rapid action.

Next, consider the projector itself, specifically the intermittent mechanism (the mysterious Maltese Cross), where each frame stands still for a twenty-fourth of a second, after which the shutter closes and the lens opening leaves us in complete darkness, during which time the next little square is fed forward.