The Mäster Olofsgården production of Swanwhite was visited by none other than Harriet Bosse. 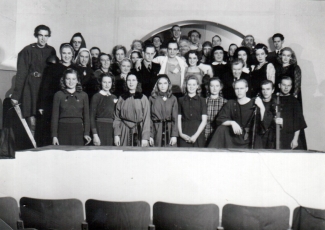 'With its mixture of young love and piety, this fairy-tale piece demands real actors in order for the poetic aura of the cues to do it justice.'
Nils Beyer

Strindberg dedicated the play to Harriet Bosse in 1901, and she seemed pleased with Bergman's production. The critics thought it was good for an amateur production, and applauded his efforts. Karin Bergman, Ingmar's mother, wrote the following in her diary.

(Bosse) spoke of the true empathy of the piece. She thanked Ingmar after the production! It was so nobly, so beautifully executed.

The performance was partly hindered by the fact that members of the ensemble were drafted and the premiere was re-scheduled to a later date a number of times.

'Ingmar Bergman proves himself as an amateur director.'