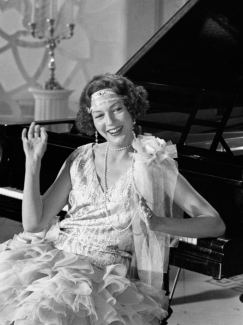 Hiort af Ornäs was born in Gothenburg, Sweden, 28 August 1921. She moved to Stockholm as a young girl, where she studied at Schartaus Business School.

She acted in her first Bergman role in The Hangman in 1939 at Mäster Olofsgården, Bergman's second play. From this point on, Hiort af Ornäs was an active member of Bergman's first ensemble, until the director moved to Helsingborg in 1944.

After graduating from school, she had her debut at the Royal Dramatic Theatre in 1943 in Dumas' The Three Musketeers and remained involved with this theatre between 1945 and 1947. Over the following 25 years, Hiort af Ornäs worked at the New Theatre, the Vasa Theatre, the TV Theatre and the Stockholm City Theatre.

Hiort af Örnas acted in her first film role in 1943 and went on to act in around 30 different films, including the Cannes award-winning role as Nurse Brita in Brink of Life. She also acted in Bergman's Scenes from a Marriage. She was often cast in rather matriarchal female roles, such as nurses, social workers, etc, reflecting a secure, familiar acting style which never led her to ‘stick out’ from the rest. This tendency sprung from early film roles such as her debut as a correctional centre teacher in Women in Prison and as a social worker in Youths in Danger. For a younger Swedish generation, she is best known for her role as Stig-Helmer's matriarchal mother in four Lasse Åberg films from 1984 to 1999.

As recently as 2006, Hiort af Ornäs was involved with the staging of Gee Girls at the Stockholm City Theatre.