The Trumpet Player and Our Lord 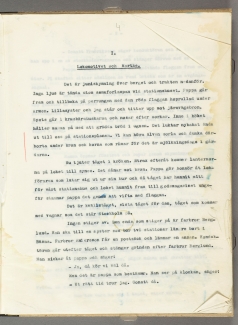 This script would later be adapted by Gustaf Molander for the film Eve.

Bergman’s foreword is concise and a little cranky:

I have written this film as a sort of protest against myself, in some ways finding myself in new circumstances. Furthermore, I have attempted to steer the film back to a pure narrative form, and the subject matter is something that has been of great importance to me for some time.

In her essay collection Paradise Lost, Pavane wrote the following: “So it is that we find ourselves in an endless and unfortunate collision with the commercial film: we have both strayed from the simplest and most important aspects of life, and the imitation world of film forced upon us every day has come to be that which seems most real.”

Wise words, and worth considering.

On that note, I take my leave.

Eve (or The Trumpet Player and Our Lord) on stage