When Will You Quit, Ingmar?

Interview with Bergman by Anna Salander, one of Bergman’s many pseudonyms. 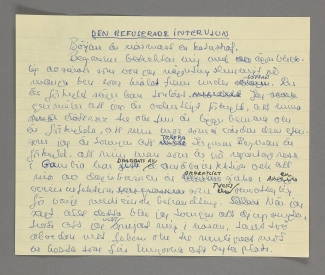 This “interview” isn’t the first Bergman had faked, and not the first time the director had interviewed himself, either.

We start off immediately on the wrong foot. Bergman regards me with open disgust, as if I were some slimy thing with hundreds of legs that had just crawled out from under the sofa. “You have a cold,” he says flatly. I reply that yes, I have a terrible cold, that my daughters – 3 and 5 years old – have also come down with colds, that my mother, who is taking care of them on account of me having to meet Ingmar Bergman, also has a cold, and also that my husband, on assignment in Gambia, has come down with amoebiasis.

At which point I was forced to blow my nose long and hard, despite having just taken one nasal decongestant, two paracetamols for the fever, and three gulps of cough syrup for a cough that threatened to turn my lungs inside out. I try to hide the snot-filled handkerchief in my hand, my skin bright red. Finally, I have a cold sore on my lower lip. “I cannot handle germs,” says Bergman, and opens the door to his room. “Even a mild cold is a great hindrance to my work.” “I’m very sorry,” I say, “but my editor made it clear that this article was to be completed as soon as possible. It was impossible to reschedule. But I don’t think I’m contagious, I’m on my third day.” “The third day is considered the most contagious,” replies Bergman, and seats himself at his desk. He must despise me, I think, taken aback. “Maybe it’s for the best if I go, then.” “No, stay put, for God’s sake. The damage is done. You’ve already infected me.”

I take out the tape recorder. “Put it there,” says Bergman and points to the edge of the desk. “It’s more important that you can hear what I say, rather than what you say, since you hopefully remember what you’ve said yourself.”

Then, silence. The February chill turns to freezing. Sleet falls slowly outside the window towards Nybroplan, where the traffic heaves about in a distant rumble. Despite the overdose of cough syrup, I’m wracked by a sudden bout of breathless hacking. Bergman turns away, watching the daylight quickly fade. I don’t want to know what he’s thinking. “Do you happen to have a glass of water,” I manage to croak out. “No,” says Bergman. “The tap water is full of rust, the pipes are almost ninety years old. But you can have a swig of Calvados.”