On Why the Gangster Writes Poetry

A story about Theobald the Gangster and his wife Elin. 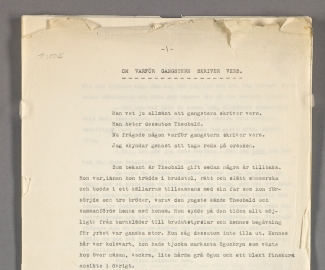 Amongst the characters, old chums Jack and Punch stand out. After his pregnant wife admits to having an affair, Theobald beats her so badly that she miscarries and dies, convincing him to change career:

The last thing the gangster witnessed, before he lost his nerve and flew off in another direction, was the run-down warehouse where Elin, the baby and Jack lay with their bottoms in the air. From that day on, Theobold began writing poetry. He placed poem after poem on top of one another, until eventually he could no longer decipher reality.

An abbreviated version of the text was published under the appropriate title, A short tale about one of Jack the Ripper's childhood memories.

Sections of this story were published as, 'A short tale about one of Jack the Ripper's childhood memories', in 40-tal, No. 3, 1944 (which was translated into French and published as, ”Un souvenir d'enfance de Jack l'éventreur” in Cinéma 59, No. 34, March 1959).