Workbook with drafts for a few plays. 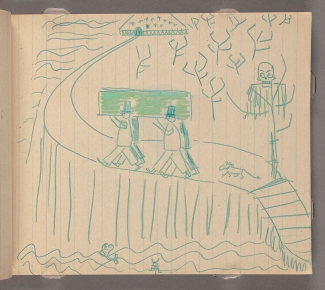 Variously, we find here The Station (appearing in another workbook), The Opera and The Lonely (which are also featured elsewhere), as well as other fragments. A sample:

A terrible row between Kalle and Stina. The maid jumps between them and breaks it up, the telephone rings. The dog barks. The radio blares. The maid sits them down, each before their own washbasin. Discontented sullenness – she’s had to rough them up a bit, and even threatened to call down the brute living up in the attic. He can go to hell. What did you say, Kalle? I mean it, I’m not afraid of that bastard. For God’s sake, Kalle, you know you can’t talk that way. But Kalle doesn’t seem to care.