One hardly needs to have seen a Bergman film to know what Death looks like. 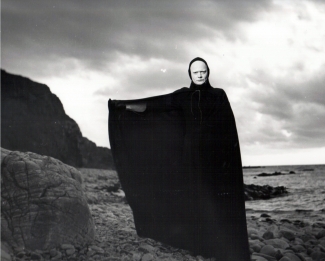 'Who are you?' 'I am Death.'
From The Seventh Seal

Bergman and Death have become the subject of parody, and a gentle (or otherwise) mockery of the art house cinema scene. The personification of Death in The Seventh Seal has been made fun of  or more respectfully extolled  in countless films, television programmes and cartoon comics. Death has made an intriguing journey from the European art house to popular entertainment. The Bergman inspired image of death is so prevalent that it prompts Hubert I. Cohen, in his book Ingmar Bergman: The Art of Confession, to reflect:

In fact, at times we may even half-imagine that a black-cloaked figure wearing a stocking-tight, black cowl around his chalk-white face is going to attend our own expiring, and that he will be speaking Swedish  with English subtitles across his waist.

Death is certainly a recurring theme in Bergman's films, yet hardly more so than in the work of many other filmmakers. And more people die in virtually any action film than in Bergman's entire oeuvre. That Bergman and death should feature in Bergman's Universe is therefore almost entirely due to The Seventh Seal. But the theme did not begin there.

As the Bergman expert Maaret Koskinen has shown, it is in an unpublished prose piece written by the 20-year-old Bergman that we first come across the figure that would reappear in The Seventh Seal. This hand-written, eleven-page text, most likely with conscious reference to Edgar Allan Poe, is entitled A Peculiar Tale. It is an emotionally charged story of an anonymous narrator who encounters a beautiful yet highly perfumed woman in a florist's. She turns out to be a prostitute, a widowed mother and an intravenous drug user. Towards the end of the story the narrator finds her beaten to death by one of her clients. Her neighbour, a garrulous old woman, tells him about the assailant: "And last night I met her on the stairs with a man. And the way he looked gave me a chill of fear. His appearance was completely white, and it didn't look as if he had any eyes, and he had a big floppy hat, and a long black cape" The tale ends with the narrator walking out onto the street, his collar turned up against the "rain and autumn storms", having gone up to the dead woman and stroked her forehead: "- Poor little thing, I thought. You wanted to be Death's pretty little harlot, and He paid you in his fashion."

That is the scene in which Death first appears Bergman, but the figure, as we know, was to return, both before and after The Seventh Seal. In Summer Interlude, shortly before her boyfriend loses his life by accidentally diving onto some rocks, Marie encounters the figure of a woman (this time) with a white face.

The forerunner of The Seventh Seal was a draft that was subsequently adapted into a one-act play entitled Wood Painting. The scene in which the knight encounters death is basically unchanged in all three versions, yet one which has two other precursors in Bergman's work. His first ever production of one of is own plays, Death of Punch, is about an actor who is visited by death. This in turn was probably inspired by the medieval morality play Everyman in which the eponymous hero learns that Death, who has been sent to earth, is near. He prays in vain for more time. A modern version of the play ("Jedermann") was written in 1911 by Hugo von Hoffmanstahl.

It is interesting to note that Bergman actually staged this particular play in April 1956. The screenplay for The Seventh Seal is dated 5 June 1956. And furthermore, the role of Envar was played by Max von Sydow, who was subsequently to play the part of the knight in The Seventh Seal.

This exploration of the Death motif in a number of plays and early works, culminating in The Seventh Seal, certainly helped Bergman himself to come to terms with his own fear of death. It has not, however, prevented him from allowing death in personified form to enter his subsequent works. In both the Royal Swedish Opera and the  Royal Dramatic Theatre versions of The Bacchae there is a disturbing white figure of a god, and In the Presence of a Clown till features death in the form of the female clown with white make-up, Rigmor, who urges the main character, Carl Åkerblom, to sodomise her.

Although death in his last film Saraband doesn't make a human appearence, it is nevertheless present as topic of discussion, imminent threat and possible way out. His very last work, Three Diaries, is a compilation by Bergman and his daughter Maria von Rosen of theirs and wife/mother Ingrid's diaries during her last months. Henrik in Saraband: "We go through life and think about death and what follows or not. And then it is as simple as this. Through music, I can sometimes get a notion. Like in Bach." Death, in short, is a subject dear to Bergman from his very first work to his very last.