Few other filmmakers have fallen victim to as many spoofs of their work as Bergman. A somewhat dubious honour, perhaps, but an honour nonetheless! 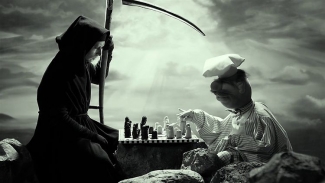 [As the title suggests, this article is on clear-cut parodies. As far as references to Bergman in popular culture are concerned (such as this one), they will be the subject of the forthcoming part 2.]

Refraining from any speculations as to why Bergman seems such a rewarding target for parody, we can merely observe that the Swedish language seems a popular approach, as does Bergman's visual style (as well, as at least one example will demonstrate, his soundscape).

And maybe, just maybe, Bergman's shall we say demanding – some would say pretentious – subject matters have something do with it?

Our first example is a classic. De Düva was screened as a short feature in American theatres. Sometimes a Bergman film would be the main bill, and reportedly the audience didn't always know when the parody ended and the original followed.

Linguistically, it may not always be accurate (every word ending with -ska seems more Slavic than Scandinavian), but there's nothing inaccuarate with the elderly professor Isac playing "badmintonska" with Death.

Speaking of language and the foreign fascination for the diacritics of the Nordic languages (making Mötley Crüe and Häagen Dazs a constant subject of pronouncement confusion to Scandinavians), do note the credits to French and Saunder's brilliant contribution to Bergman parodies.

One of the most famous example is by a British group of comedians in their film The Meaning of Life (1983):

Monty Python have themselves in turn been "Bergman parodied", in this trailer for the imagined mash-up between The Seventh Seal and Life of Brian:

Monty Python notwithstanding, the best marketing Bergman ever had is probably a scene from college buddy movie Bill & Ted's Bogus Adventure.

That Death returns in the underestimated The Last Action Hero probably owes at least as much to Bill and ted as to Bergman.

As you no doubt have noted by now, one film in particular, and one scene from it, is a recurrent favourite among the parodies. Not least in all the animations. A pioneer in the subgenre of animated Seventh Seal parodies was Animaniacs:

But the geniuses of the YouTube generation are worth noting as well. Take this gem, for example:

Not to mention this one, combining Scandinavian icon Bergman with another ditto:

And of course we have the Muppets! Adding to the fun is that the Muppets ranked among Bergman's personal favourites. It is very likely that he saw this one when it was first aired in Sweden:

Getting ready for a more complex paraphrase? We give you Scenes From an Idiot's Marriage, where Martin Short plays Jerry Lewis playing a character out of an imagined Bergman film. (The clip, with its references to Who's Minding the Store? and The Errand Boy, as much a parody of Jerry Lewis – like he needed one – as it is of Bergman.)

Let's do one of the horror variety:

In Sweden, we are more likely to mock Bergman himself, since the person Ingmar Bergman is far more known to Swedes than his movies. That's how we roll. Here's a brilliant example (though there are many others):

You might think that all this business with Bergman parodies would be a thing of the past. But apparently they keep coming:

We've saved a personal favourite to last, when genious French actor Jacques Villeret had the opportunity to make his impression of a Bergman film (from Claude Lelouch's Robert et Robert):

Missing something? Get in touch! (And no, we haven't forgotten Love and Death. But we'll see enough of  Woody Allen in part 2.)