This collaboration between Ingmar Bergman and the composer Daniel Börtz on an opera version of Euripides' play came about at Bergman's behest. 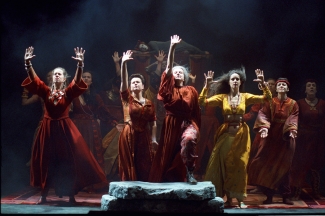 '...An exploration of the feminine, and underneath that, the feminine in man, which cannot be suppressed unpunished.'
Bonnesen, Politiken

The libretto for the opera is based on Euripides' play The Bacchae. The original text was re-worked, and the bacchae themselves became the focus of the action. Bergman wrote an account of the previous history of the various women, which was printed in the Royal Swedish Opera programme. Instead of an anonymous group, Bergman turned the women into individuals who each behave and perform in an individual way. In other words, the group was an individualised collective, portrayed by carefully selected soloists. Bergman made an addition, creating a 14th baccha, Talatta, a non-speaking dance role performed by Marianne Orlando. Talatta functioned as the dynamic doppelganger for Dionysus. The performance was a huge success.

The opera The Bacchae was produced for three media. In addition to the opera performances, there was also a television version, and the record company Caprice turned the television soundtrack into a double CD. In addition, Bergman subsequently staged a pure theatre version of Euripides' drama.