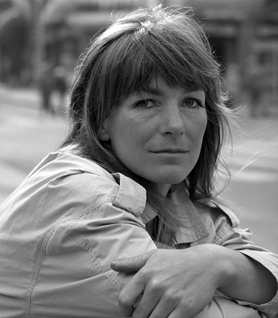 Film editor 1949-
The woman responsible for the film editing on more than a dozen Ingmar Bergman projects: TV dramas, documentaries and some of his greatest masterpieces, including Fanny and Alexander.

It is impossible to hide any problems which arose during filming; he snoops them out immediately.
Sylvia Ingemarsson on Ingmar Bergman

Born on 10 May 1949 in Värmland in western Sweden, Ingemarsson moved to Stockholm at the age of 16 to work as a nanny. The couple who hired her both worked in film, providing her with industry contacts.

Ingemarsson embarked on her creative career at Europa Film in 1968, where she worked as a film editor's assistent on a wide variety of productions, including Susan Sontag's Duet for Cannibals, Sidney Lumet's The Sea Gull, and Roy Andersson's A Swedish Love Story.

Ingemarsson attended a film editor course at Swedish Television between 1970 and 1971, and was hired there after she completed her studies, where she worked for six years. She took leave when asked to edit Bo Widerberg's Man on the Roof. This film was a huge success and laid the groundwork for Ingemarsson's future career.

The following year, in 1977, Bergman's head of production Katinka Faragó needed an editor to work on Autumn Sonata, as the director's regular editor Siv Lundgren was ill. Ingemarsson was hired and thus began her long, loyal working relationship with Bergman, who used her right up until the end, including in Saraband.

Working on a total of 14 productions (including Faithless), Fanny and Alexander was the most popular with which she was involved. During the 1990s, television productions took the upper hand, and Ingemarsson was involved in The Bacchae, The Image Makers and In the Presence of a Clown. Throughout this time, Ingemarsson also worked with a number of other directors, including Erland Josephson, Gunnel Lindblom, Stig Björkman and Lasse Åberg.

Since 2000, Ingemarsson has worked as Professor of Moving Image Production at Dalarna University. She also teaches at Den Norske Filmskolen in Lillehammer, Norway.

Ingemarsson, who is now named Sylvia Ingemarsdotter, has lived in Leksand, Sweden, with her husband Erik since the 1980s.