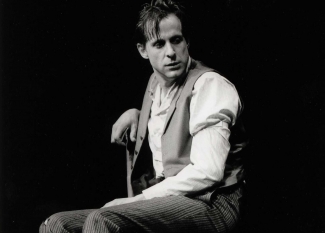 Leading young star of the Royal Dramatic Theatre during the 1980s, who shot to international acclaim playing various Hollywood villains.

'There has always been something different about Peter Stormare, something odd, something frenzied.'
Ingmar Bergman

Rolf Peter Ingvar Storm was born in Kumla, Sweden, on 27 August 1953, and grew up in Hälsingland.

He began his theatrical career as a stagehand at the Royal Dramatic Theatre, and then attended the Stockholm Academy of Dramatic Arts from 1978-81. During this time, he changed his surname to Stormare, as there were already two other actors working under the name Peter Storm.

Stormare quickly became one of the leading Royal Dramatic Theatre actors, due to his roles in Nigel Williams' Class Enemy and Sam Shepard's Curse of the Starving Class. His most impressive roles were as Jean in Miss Julie, the leading role in Hamlet and Edmund in Long Day's Journey into Night, all of which were noteworthy Bergman stagings.

Stormare had his directorial debut at the Royal Dramatic Theatre in 1987 with Harold Pinter's The Dwarfs, and proceeded to stage quirky classics such as Strindberg's The Crown Bride and The Great Highway, as well as Almqvist's Amorina. During a sabbatical in the USA, he acted in a urinal scene with Robin Williams in Awakenings.

In 1990, Stormare accepted an offer to be Artistic Director of the Tokyo Globe Theatre, where he staged Hamlet, A Midsummer Night's Dream and Miss Julie. He also directed Miss Julie in New York City. He moved to New York in the summer of 1993, where he participated in Rasputin at the Actors Studio and in The Swan with Frances McDormand at The Public Theatre.

Acting in the Coen brothers' Fargo in 1996, once again with Frances McDormand, marked Stormare's international acting breakthrough. This role led to his being cast in a number of American TV programmes and playing many an oddball in action films such as Armageddon, Minority Report and Bad Boys II.

Peter Stormare re-united with Ingmar Bergman in 1997, when Stormare played Petrus Landahl in tv-production In the Presence of a Clown.