Dissatisfied with his TV version from 1963, Bergman produced his second of four performances of A Dream Play, heavily downplayed and with two different actresses in the role of Indra's daughter. 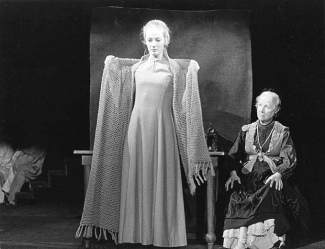 'It is as if I had never seen Strindberg's The Dream Play until now. In exactly one hour and 45 minutes without intermission, one sits captivated, fascinated, caught within a great poet's and a great director's dream.'
Håkan Tollet, Hufvudstadsbladet

Bergman was interviewed on the radio about the production, where he talked about his difficulty with Strindberg's conception of Indra's daughter as a female Christ figure. It led him to make some radical dramaturgical changes, having the character of Indra's daughter performed by two different actresses, one enacting the divine woman and the other representing Agnes, the earth woman.

Strindberg prepared for the opening of his A Dream Play in 1907 by buying a slide projector with which he planned to project visual images to create a dream-like mood. But he could not overcome the technical drawbacks of this primitive machine. In his 1970 version, Bergman utilized Strindberg's idea by painting a rectangular screen in the back of the stage, on which images could be projected.

There was considerable critical ambivalence about Bergman's cuts and changes. Allan Fagerström in Aftonbladet was perhaps the most negative. 'this variation of A Dream Play is not signed by Strindberg but by a humorist [...] the dream mood is strangled; this production is straight and pure prose [...].'

Reviewers though agreed that Bergman revealed a confident knowledge of Strindberg's text and that his signature was unmistakable, in a production that challenged the Molander tradition and one in which stage aesthetics dominated over metaphysics.

Bergman's production of A Dream Play went on tour in Sweden and was invited to a number of guest performances abroad.

Finland, Helsinki, 19-20 May 1970
During The Royal Dramatic Theatre's guest visit to Helsinki, Bergman held a press conference in which he talked about his relationship to Strindberg. 'Strindberg has always followed me.' Asked what kind of benefit a guest vistit might have for the director and his ensemble, he replied, 'For the director, none whatsoever. A heck of a nuisance. The task is to keep a hundred fleas on one sheet. [...] But for the ensemble, it is immenslely valuable to perform in a new environment.'

Austria, Akademic theatre of Vienna, 10-12 June 1970
Bergman appeared at a press conference in the Vienna Concordia House and surprised the journalists with his humour and light-heartedness. He spoke about his love-hatred of Strindberg, his wish to stage The Magic Flute, his directorial premises, and his plan to make film comedies in the future, 'since life is so sad, people have nothing to laugh at'.

Bergman's international reputation and the name of Strindberg no doubt account for the greater attendance at A Dream Play performance. Almost all reviews singled out Bergman's production as the festival's high point, seeing it as a new reading of Strindberg's work and stressing the simplicity of décor and the high professionalism of the ensemble.

Italy, Venice, Palazzo Grazzi, 27-28 September 1970
The performance was the second appearance of Strindberg's play on an Italian stage and the first Italian encounter with a Bergman stage production, though Bergman was a very well-known name in Italy as a filmmaker.

UK, London, the Aldwych, 19-24 April 1971
British reception was mixed. Among the positive responses was a review praising Bergman's lucid mise-en-scene and The Royal Dramatic Theatre's fine ensemble acting. But according to The Daily Exress, the performance in Swedish, without intermission, represented the critic's definition of hell. 'Yesterday evening was as listening to a madman phoning from China on a poor line, to the accompaniment of SOS signals from a sinking ship [...].'

West Germany, Oberhausen, Essen and Stuttgart, 12-16 June 1971
West German reviewers commented especially on Bergman's realistic, word-oriented production, its absence of Strindbergian visual symbolism and metaphysics. For the majority of West German theatre reviewers, this was their first encounter with Bergman as a stage director. Many dwelt on how the well-known filmmaker had emerged as a man of the theatre.