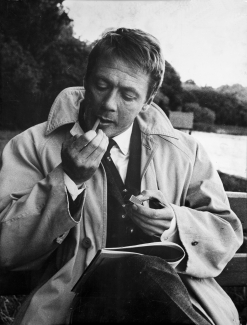 Actor 1924-1997
Popular actor, singer, author and director. His work for Ingmar Bergman was confined to minor roles. Most Swedes associate him with a string of film adaptations of Astrid Lindgren's beloved children's books.

He was a one-off. But, damn me, he managed to be a one-off in a universal way!
Erland Josephson

The Swedish Film Academy's plaque for Natives of Hemsö (1966)

Born Johan Allan Edwall in Jämtland in the north of Sweden on 25 August 1924, he grew up in a communist household with a father who was an active trade unionist. He studied at the Royal Dramatic Theatre drama school between 1949 and 1952, and was a member of the company of that theatre during various periods in his career. He was also associated with the Stockholm City Theatre where, in addition to acting, he also directed plays he had written himself.

Edwall was also a working musician who wrote his own songs, often in heavy northern Swedish dialect and strongly influenced by traditional Swedish folk music – usually in a minor key and with violin and accordion accompaniment. He released a number of records, the best-known of which is Grovdoppa (1979), and he often appeared at folk festivals.

His big breakthrough came with his appearance in a Swedish television adaptation of August Strindberg's Natives of Hemsö in 1966, followed in 1970 by The Red Room. Allan Edwall was a much-loved actor, especially among children, due in no small measure to the parts he played in film adaptations of Astrid Lindgren's novels, most notably as the father of the mischievous Emil, during the 1970s and 80s. One testament to this huge popularity is an incident that occurred once when he was out walking in central Stockholm: he was assailed by muggers, but when they realised that they were robbing Emil's father, they left him alone and ran off!

In 1986 he acted alongside Erland Josephson in Andrei Tarkovsky's Swedish production The Sacrifice. In the same year he opened his own theatre in Stockholm, Teater Brunnsgatan Fyra, where he engaged in everything from selling tickets to acting. There he formed an artistic partnership with the writer Kristina Lugn, who took over as artistic director of the theatre following Edwall's death.

Edwall played more than 400 roles in film, the theatre, television and radio he particularly excelled as the ordinary man, a man without pretensions.

Allan Edwall died in Stockholm of prostate cancer on 7 February 1997.