In order to stage George Tabori's piece complete with Bach and hard rock, Bergman chose the small stage at The Royal Dramatic Theatre, which facilitated his sought-after contact between stage and audience. 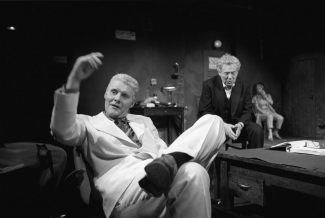 Tabori's drama, part meta-theatrical farce, part Jewish morality play, is full of intertextual quotes and references to the Bible, Shakespeare, and Milton. On the farcical level it presents a rehearsal that ends in disarray; as a morality play, it depicts a series of disasters throughout the history of mankind where God has decided not to intervene.

As Christina Lundberg stated in Västerbottenskuriren, 'Seriousness shares the space with farce in a performance spiced with extravagant humor.'