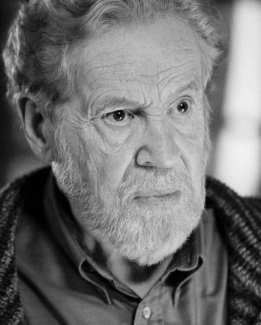 Actor 1923-2012
Actor, author and director who can boast the longest running working relationship with Ingmar Bergman, begining with The Merchant of Venice (1940) and ending with Rosmersholm (2004).

'I was impressed, enthusiastic and tormented. This was a talented man. Moreover, he had a mistress.'
Josephson on meeting Bergman for the first time

Erland Josephson was born 15 June 1923 in Stockholm, Sweden. The Josephson family includes several cultural figures who have long been central players in Swedish artistic life. Erland's great-grandfather's brother was the director, theatre head, and playwright Ludvig Josephson (1832–99), who staged Strindberg's Master Olof (1881) and Lucky Per's Journey (1893). His brother Jacob Axel (1818–60) was a composer and his nephew Ernst (1851–1906) was a painter. Erland's uncle Ragnar (1891–1966) was an art historian, playwright and head of the Royal Dramatic Theatre 1948–51, a position which Erland himself would hold 15 years later.

Erland Josephson met Ingmar Bergman for the first time when he was 16 and Bergman was 21. Bergman, who directed Josephson as a novice in The Merchant of Venice at Norra Latin, made a strong impression on him:

I was impressed, enthusiastic and tormented. This was a talented man. Moreover, he had a mistress. She swept into Norra Latin with a fur shawl wrapped around her neck to attend our rehearsal. Ingmar led her politely and elegantly to the first row. He presented her as Sweden's greatest amateur actress. He was already an experienced man. My mouth was agape.

Bergman had already come close to the Josephson family in the late 1930s, when he visited Sandbergs bookshop on Sturegatan in Stockholm, owned and operated by Erland Josephson's father. Here Bergman met Sven Hansson from Mäster Olofsgården and got his first theatre job.

Erland Josephson had no formal acting education but trained as an amateur actor at Stockholm Student Theatre. In 1945, he was employed at the Helsingborg City Theatre where Ingmar Bergman was director. Bergman left the position in 1946 and moved to Gothenburg. Josephson remained until 1949 and moved to Gothenburg, where the two were reunited. With his cultivated wit and intellectual presence Josephson often played frustrated and skeptical observers without any agency. In 1956 he joined the Royal Dramatic Theatre, and  remained up until his death starring in over 60 roles.

Just as in the theater Erland Josephson has been regular in almost all phases of Ingmar Bergman's filmmaking. He had a minor part in It Rains on Our Love, but received larger roles first in The Magician and Brink of Life in the late 1950's. He received international attention with the role of Johan in Scenes from a Marriage in 1973 and played opposite Liv Ullmann in Cries and Whispers, the theater production of Pygmalion and Face to Face.

Because of his part in Bergman's films he embarked on an international film and theater career in the 1970s, starting with Nietzche in Liliana Cavani's Beyond Good and Evil in 1977, an Italian judge threatened by the mafia in Io ho paura, a businessman in Dusan Makavejev's Swedish produced Montenegro and finally two films by Andrey Tarkovsky (Nostalghia and The Sacrifice). In the late 1980s he even played Gajev in Peter Brooks production of Cherry Farm in New York and was awarded an Obie. The production then went on tour in the Soviet Union and Japan, a tour he described in his entertaining book Rollen (The Part):

I am the permanent luxury emigrant. For nearly 15 years I constantly traveled back and forth across borders, working for the best pay in different countries and cultures, economically, socially and politically. I am of the international upper class, the Swedish petit bourgeoisie of Jewish extraction with poor language skills, a conveyor of a few expressions and faces, with some intonation that combines ancient human experience with timely coquetry.

Parallel to his acting career Erland Josephson was a prolific writer and published a series of novels and autobiographical books, two poetry collections and wrote forty or so pieces for stage, radio and TV. His first poetry collection was published in 1946. The following year Bergman chose one of Josephsons novels as a favorite for Veckojournalen. Josephson as writer is similar to the actor – witty, cultivated and with a certain ironic coolness. His first play Utflykt was produced at the Gothenburg City Theater in 1954 followed by Sällskapslek and Sagospel a few years later. Sällskapslek was also made into a 1963 film directed by Torgny Anderberg. Together with Bergman he wrote the comedy Pleasure Garden and All these Women in the early 1960s under the pseudonym Buntel Ericson. In 2006 his play Blomsterplockarna was staged at the Royal Dramatic Theatre in 2006.

Together with Sven Nykvist, Josephson formed the production company Josephson & Nykvist Production HB. They produced the film En och En, directed by Josephson, Nykvist and Ingrid Thulin and Marmeladupproret, where he wrote, directed and played the leading role. He has also starred in Liv Ullmann's Sofie, Kristin Lavransdatter and Faithless.

In addition to being an actor, writer and director, Josephson was also a manager and board member. From 1963–66, he was chairman of the Swedish Theatre Association. In 1966, after three turbulent years Bergman resigned as head of the Royal Dramatic Theatre and Josephson took over. He remained until 1975, despite a strong debate both within and outside the theater about the national stage and whether or not there was a strong bourgeois tradition. From 1972–75 he was also chairman of the national theatre organisation. In the 1990s he was director of the Swedish Film Institute and chairman when Stockholm was the 1998 Cultural Capital of Europe.

Josephson has been married to actresses Kristina Adolphson and Barbro Larsson. From 2000 until his death he was married to Ulla Åberg, the head dramaturgist at the Royal Dramatic Theatre. He is the father of actress Charlotte 'Lotta' Larsson and director and producer Louis Josephson.

Josephson passed away on 25 February 2012 after suffering from Parkinson's disease.