In one of Ibsen's last dramas Bergman gathers a fantastic ensemble, with the Bergman associates Erland Josephson and Gunnel Lindblom in the leading parts. 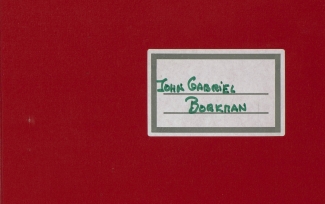 "A perfection so polished it runs the risk of being dead."
Gerell

Ingmar Bergman cut down Ibsen's drama to a 75-minute performance. He (and Erland Josephson) toned down Borkman's megalomania, turning the former mining industrialist into an old man who dreams of his former power rather than someone seeking personal restitution. Gunnel Lindblom's portrayal of Mrs Borkman stressed the wife's angered pain over the shame that Borkman's economic machinations, bankruptcy and prison term had brought the family. Her embittered voice stood out as the central voice in the produciton, accompanied by the echoing steps of the restless Borkman traipsing about upstairs in the house and of son Erhart's comings and goings. The only non-diegetic sound used were a few bars of piano music.