Ingmar Bergman staged Hjalmar Bergman's The Legend three times: Helsingborg in 1945, Malmö in 1958 and at the Royal Dramatic Theatre in Stockholm in 1963. 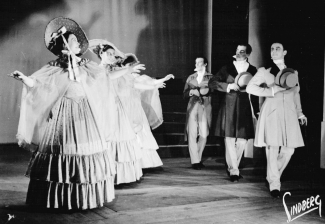 'Ingmar Bergman created an inspired scene. He unequivocally respected the author's intentions, not just as a matter of reverence, but he followed Hjalmar Bergman's directions, theatrically speaking.'
Tom, Skånska Social-Demokraten

The opening night did not begin well. Thanks to competition from a Karl Gerhard cabaret and a concert with Rosita Serrano, the theatre was far from full. Writing in Skånska Social-Demokraten, Tom (Åke Thomson) described how the audience in the first act, 'turned in their seats, coughed and cleared their throats. The doors creaked as people arrived late due to the rain'.

Other critics found the performance both brilliant and exciting, and were especially impressed by the work of the scenographer, Gunnar Lindblad.

In Skånska Social-Demoktraten, Tom wrote that the production had both '(d)ramatic nerve and intensity'. And even though opening night was not full, the performance was appreciated. The stage designer Gunnar Lindblad was also given attention in the reviews. One wrote, 'Nothing seems impossible for that man'.

Many critics have found the piece hard to characterise. Consequently, it is also hard to stage a production that does justice to all its nuances and levels. In certain parts the play has a decidedly lyrical character which, in others, is in stark contrast to a considerably more robust realism that bears witness to the author's insights into the brutality of life. The plot has the quality of a dream, a fantasy: it is a fairy tale about the light of love in contrast to the darkness of deceit.

Many commentators, Ingmar Bergman included, have pointed out the plays striking similarities with Alfred de Musset's play One Doesn't Trifle with Love.