After five performances on the smaller stages of the Gothenburg City Theatre, Torsten Hammarén thought it was time to release Bergman on the big stage. 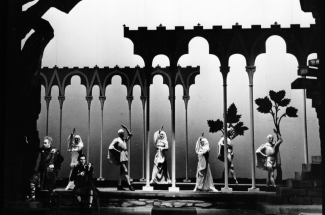 'The stage smells of blood and crime.'
Sigfrid Neander-Nilsson, GMP

Apart from Bergman's three Macbeth productions, Shakespeare's tragedy has had a rather meagre stage history in Sweden and was produced only five times in the first half of the 20th century. Not even August Strindberg favoured the piece; he found it too 'elementary and vulgar'. One review of Bergman's Gothenburg production suggested, however, that for the young generation of theatre people, living in the aftermath of World War II, Macbeth might become a centrepiece in the Shakespearean canon.

In the aftermath of his production of Macbeth in Gothenburg, Bergman talked to the press about the execution of the Shakespearean blank verse. 'I think Shakespeare should be spoken, not read in verse. The modern Swedish public is not use to hearing blank verse. Most cultures have a treasure of classical drama in bound form but we lack playwrights who write in verse.'

More than 10 years after his Gothenburg production of Macbeth, the play was still on Bergman's mind and he was thinking of doing a fourth production. All the reviews agreed that Macbeth was a play that suited Bergman's fiery temperament, one in which he could find a dramatization of his own personal theme: how, in a world without grace, man can fall victim to demons pointing out the road to hell.

Most critics accepted Bergman's Gothic excesses on stage design and his use of the gaudily outfitted and perversely lusty witches - emblematic signs of the title figure's ugly subconscious drives.

The stage design impressed the reviewers, but took the focus from the actors and the text. Herbert Grevenius in Stockholms-Tidningen, for example, wrote, 'One's eye drank itself full, so that one's ear became absent-minded'.