Gilbert Keith Chesterton's play has as its central theme the confrontation between a sceptical scientist and an illusionist, a theme which Bergman returned to in his 1958 film The Magician. 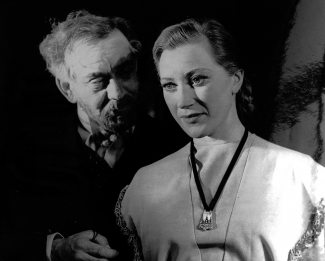 'Here Ingmar Bergman is the director. That means inventivity and a keen scent for the theatrical, but also a certain inclination for making things more complicated than they really are.'
Ebbe Linde, BLM

Between the staging of two of his own plays - The Day Ends Early and Unto My Fear - Bergman staged this less known one-act play by Chesterton. It was presented in a double programme along with Thornton Wilder's The Long Christmas Dinner, the debut direction by Josef Halfen.

The performance was considered an attack on modern financial entrepreneurs and scientists who lack moral stature and adhere to principles of pragmatic relativity. Chesterton gave voice to a demand for absolute faith, even to the point of absurdity.

Bergman was cosidered having 'more than enough dynamics and boldness for a genius'.

Once again the main part was acted by Anders Ek, whose part Kjell Hjern in Göteborgs Handels- och Sjöfartstidning found
'too glaring and it should have been the director's responsibility to subdue the intensive and interesting actor's sudden, unshaped debaucheries.'

Critics spoke of Bergman's 'almost spooky self-possession and remarkable visual imagination'. But in spite of this the production was not an unconditional success and there was renewed concern about Bergman's use of theatrical effects at the expense of realistic stagecraft.

The play is a mix of comedy and drama, romance and suspense. A duke hires a magician to entertain some guests one evening at his estate. The duke's nephew is a young and arrogant agnostic who is determined to expose all the magician's tricks. But there is one he cannot explain which nearly drives him mad. Meanwhile, the magician and the duke's niece, naturally, fall in love.