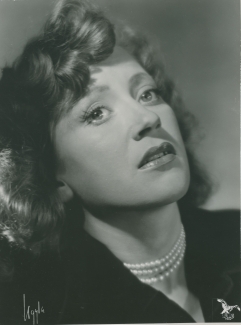 Versatile and soulful actress said to have the most achingly expressive eyes on the Swedish stage. Performed to great acclaim in several of Bergman's productions at the Gothenburg and Malmo City Theatres, and later at the Royal Dramatic Theatre.

Born in Gothenburg, Sweden, 26 November 1921, after graduating from school, Fridh decided to pursue an acting career. Her father did not approve of this decision, and so she worked at an office for a short while. She meanwhile followed through on her acting plans and in 1942 was accepted at the newly opened Gothenburg City Theatre Acting School. Fridh was one of the leading acting students and was cast in roles whilst still completing her studies. After passing her exams, she was hired at the theatre.

Fridh remained with the Gothenburg City Theatre until 1949, when she had her big breakthrough in the role of the orphan girl Malin’s Maria in Vilhem Moberg’s Vår ofödde son, which was met with raving reviews, including by none other than Herbert Grevenius. She also worked with a handful of Bergman stagings in Gothenburg, including in a leading role in The Restless Heart. After moving to Stockholm in 1950, where she worked as a freelance actress for two years at Intima Teatern and Alléteatern, she joined up once again with Bergman’s ensemble in 1952, this time in Malmö. During her time in Malmö, she played Nora in A Doll’s House, Rosalinda in As You Like It, the stepdaughter in Pirandello’s Six Characters in Search of an Author, and a frightfully elusive Célimène in The Misanthrope. The latter two were under Ingmar Bergman’s direction.

As with many of Bergman’s Malmö actors, Gertrud Fridh was hired at the Royal Dramatic Theatre in 1958, where she performed in larger roles, including Faidra in Alf Sjöberg’s staging of Euripides’ Hippolytos in 1965. Arguably her biggest career success was playing the title role in Bergman’s staging of Hedda Gabler.

Fridh also acted in comedies on private stages, and featured as a guest performer in 1963 as Maggie in Teenagerlove opposite Jarl Kulle at Oscarteatern. Although she primarily considered herself a stage actress, Fridh acted in around 15 films, six of those with Bergman.

Throughout her career, she was praised for her intense, fiery, expressive acting style. Although she was competent in a variety of acting situations, she came into her own playing emotional, romantic roles, with her unique, deep, sensuous voice greatly contributing to her intensity. She was said to have the most expressive eyes in Swedish theatre, which according to one critic worked as an emotional reflecting-board of fear, despair and at times even evil. According to another critic, she was ‘a blossom and a blaze all at once’. She profoundly displayed these characteristics in one of her first and best film roles as the prostitute Sally in Bergman’s A Ship to India. When, on the other hand, she acted in straightforward comedies such as Trav, hopp och kärlek, the contrast between her uniquely intense melancholic manner and the otherwise cheerful mood of the film created quite a powerful effect.

In 1977, she retired from the Royal Dramatic Theatre, and acted in her final screen role in the TV production Kärlek genom ett fönster in 1978.

Fridh spent the later years of her life in Spain, where she passed away 11 October 1984.