Mozart's opera set in a mock-up version of the Drottningholm Theatre. 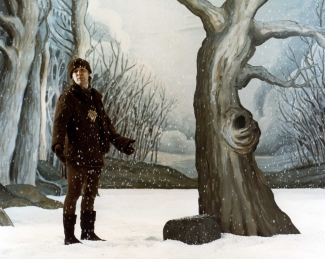 "The Magic Flute became my companion through life."
Ingmar Bergman

Bergman's film version of Mozart's opera, set in a mock-up version of the Drottningholm Theatre, had gained intense press coverage long before its premiere. Many headlines focused on the production costs, which were steep by television standards. Depending on how you chose to calculate it, the sum would land somewhere between SEK 2,5 and 4 million, by far the most expensive Swedish TV production ever in its day. Just as with Cries and Whispers or Fanny and Alexander, irritated voices were raised about the resources that were allotted to Bergman, and thus denied other, less fortunate, directors and producers.

The concerns, as in the previous cases, turned out to be unfounded. Through sales to several foreign tv networks, TV2 made a tidy profit from The Magic Flute – a couple of million. Also internationally, the film garnered acclaim. And as recently as during the 250th anniversary of Mozart's birth in 2006, Bergman's interpretation was one the most frequently named and requested 'Mozart works'.

Bergman on his relationship to the opera in Images:

I was twelve years old when I saw The Magic Flute for the first time at the Royal Opera House in Stockholm. [...] I already had my puppet theater. I mainly performed whatever stories I could find in the collections of children's fairy tales. there were four of us about the same age who were involved with the theater. [...] We made everything ourselves: the puppets, the costumes for each puppet, the scenary, and the lights. We had a revolving stage, a set that could be lowered, and a curved panoramic backdrop. We become increasingly sophisticated in our choice of plays. More and more, I began to look for plays that required complicated lighting and frequent changes of scenary. Therefore, it seemed rather natural that The Magic Flute began to occupy a large place in the imagination of the head of this theater. One evening the director saw The Magic Flute performed and decided to do a production of the play. Unfortunately, the project fell through because it was too expensive for us to purchase a complete recording of the opera.

The Magic Flute became my companion through life. [...] Sometime later I went to the Malmö City Theater. On the main stage, at least two operas were produced each season, and I voted ardently for us to stage The Magic Flute. I was eager to direct it myself. That could probably hava happened, had the therater not contracted with a German opera director of the old school for a whole year. He was around sixty years old and had directed during his legthy career most operas in existence. It was natural that he direct The Magic Flute, a monumental mastodon of a performance with heavy sets. For me, the disappointment was twofold.

There is another line that merges with my love for The Magic Flute. As a boy I loved roam around. One october day I set out fot Drottningholm (in Stockholm) to see its unique court theater from the eighteenth century. For some reason the stage door was unlocked. I walked inside and saw for the first time the carefully restored baroque theater. I remember distinctly what a bewitching experience it was: the effect of chiaroscuro, the silence, the stage. In my imagination I have always seen The Magic Flute living inside that old theater, in that keenly acoustical wooden box, with its slanted stage floor, its backdrops and wings. Here lies the noble, magical illusion of theater. Nothing is; everything represents. The moment the curtain is raised, an agreement between stage and audience manifest itself. And now, together, we'll create! In other words, it is obvious that the drama of The Magic Flute should unfold in a baroque theater.

The seed was sown by the end of the 1960s. For years the Swedish Radio orchestra had performed public concerts at the Circus in Djurgården. [...] Ene evening I ran into the then head of the Swedish Radio department, Magnus Enhörning. We sat chatting during the intermission, and I pointed out that this would be the perfect place to stage Stravinsky's Oedipus Rex. 'Let's do it', he said. [...]. Enhörning asked if I had any other suggestion to propose, and I heard myself say, 'I want to do The Magic Flute for television'. 'Good, let's do that too', said Enhörning, and that's the long and short of how we reached our decision. [...] Without the undying enthusiasm of Magnus Enhörning, The Magic Flute would never have been made. He was untiring, and not having been born yesterday, he knew every trick in the books, and he also knew how to go about making the best decicisions.

First of all we needed a conductor. I asked Hans Schmidt-Isserstedt, and old friend. In his inimitable accent he replied: 'Nein, Ingmar, nicht das alles noch mal! (no, Ingmar, for the last time, no!) That was exactly how to respond to the paradox of The Magic Flute: musically it is insanely difficult. Despite this fact, the conductor is seldom rewarded for his efforts. Next I turned to Eric Ericson whom I admire and respected as choirmaster and conductor of the oratorios. He responded with a definite no. But I did not give up. He possessed all the talents I wanted in a conductor: a tingling warmth in his approach to music, a passion for interpretation, and -most of all- a feeling of natural voice, which he had developed during his fabulous career as choirmaster. Finally, he accepted.

Since we were not performing The Magic Flute on a stage but in front of a microphone and camera, we did not need large voices. What we needed were warm, sensuous voices that had personality. To me it was also absolutly essential that the play be performed by young actors, naturally close to dizzy, emotional shifts between joy and sorrow, between thinking and feeling. Tamiro must be a handsome young man. Pamina must be a beautiful young women. Not to speak of Papagemo and Papagena.

Ingmar Bergman wants to make theatre. He has not chosen voices: he has chosen people. Josef Köstlinger and Irma Urrila, for example, are not the most accomplished singers he could have sought out to play Tamino and Pamina. But they look and sound as if they had just stepped out of an ancient tale of chivalry. I prefer that kind of truth. [...]

And take Papageno! Naturally this time, as ever, he is the one who steals the show. [...]

Ingmar Bergman is no less multi-facetted... here than when he staged 'The Ghost Sonata' and 'To Damascus'. On the surface everything is a fairy story, entertainment, sawdust and tinsel. But underneath, here as always in The Magic Flute, indelibly impressed, there are musings over life and death.

Bergman has given life to The Magic Flute at the same time as presenting a theatre performance, yet since he is so at one with the theatre, the atmosphere is not broken but intensified. [...]

Without attempting to replicate exactly the theatre style of the day, Bergman has brought the 18th century to life so effectively that it becomes the present, and the opera relevant to our own lives. With The Magic Flute he gives us a glimpse of eternal human concerns and emotional richness.

In the midst of all the hullabaloo surrounding Schikaneder's characters and Mozart's wonderful music, it is easy to forget that this is an Ingmar Bergman film. It would be too much to probe into all the details, although keen Bergman enthusiasts have probably already made their discoveries. Watch The Hour of the Wolf again! The most noteworthy change in the opera version is that Sarastro has become Pamina's father – although I wonder whether this device is of more pedagogical than opera-historical significance. [...]

The framework of the opera performance is the best imaginable – the park of Drottningholm Palace at dusk. The expectant faces of the entire audience, in which we spot both Mozart and Bergman himself. The interval, when the Queen of the Night enjoys a cigarette and a tiny slave reads a Donald Duck comic. This meeting of Mozart and Bergman has been truly a major event in Swedish cultural life.'

A perfect summer opera, Mozart's playful The Magic Flute is brought to joyous cinematic life through the talents of Bergman, an acclaimed organist and musicologist who once declared that he would have become a conductor if film had not claimed him first. Love triumphs over all, as a young man seeks to rescue a beautiful princess from the hands of an evil sorcerer.

Peter Cowie on The Magic Flute:

"Bergman's film of The Magic Flute remains the finest screen version of an opera ever produced. Shot in sumptuous color by Sven Nykvist, and featuring some of the finest Nordic singers of the day, the film marks Bergman's overt tribute to classical music. Mozart's magic has been neither betrayed nor merely reproduced by Bergman, but rather filtered through the Swedish maestro's own metaphysical vision in a remarkable act of homage." 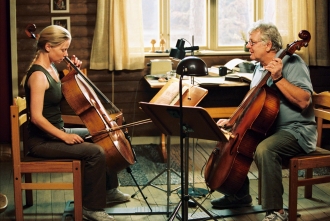