Bergman's third staging of The Misanthrope tantalized the public. 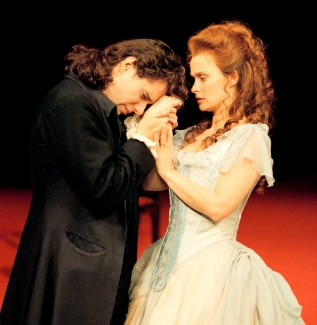 'There is a macabre comedian critiquing our times in Thorsten Flinck's outstandingly raging mistanthropy, one who is difficult to ignore.'
Lisbeth Larsson, Expressen

Bergman's third The Misanthrope was performed on a virtually empty stage: the only props were a bed, a couple of chairs and some mirrors, ie a set that formed a stark contrast to the luxurious costumes and extravagant wigs worn by all the performers except Alceste, dressed in simple dark clothes and no wig.

For this production the professionalism was almost taken for granted as critics spoke of a production full of vitality, wit, and beauty.

In a programme note Bergman wrote that this production of The Misanthrope owed a great deal to Ariane Mnouchkin, whose 1978 film version of Molière's play had greatly impressed him. Mnouchkin's Shakespeare production in Paris had coincided with The Royal Dramatic Theatre's and Bergman's King Lear performances.