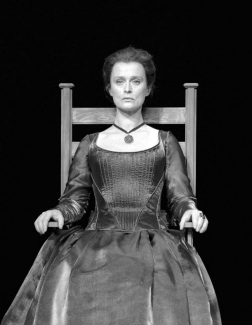 Widely recognized as one of Sweden's finest actresses, Endre entered the stage as an understudy in Bergman's production of Long Day's Journey into Night at the Royal Dramatic Theatre, which proved to be the start of a fruitful collaboration.

'There was a TV series so indescribably stupid called Varuhuset. I sat and watched it every time because Lena was in it and I thought, that girl will be something when she is ready. She was alive in every sense of the word.'
Ingmar Bergman, as interviewed by Henrik Sjögren

Lena Endre was born 8 July 1955 in Stockholm, Sweden. She began studying marine biology, but quit her studies. In 1979, she acted with amateur theatre groups at Teater Sputnik and Inge Waern's Theatre Studio. In 1983, she was accepted at the Stockholm Academy of the Performing Arts, where one of her classmates was Gunilla Röör.

Graduating in 1986, she quickly snapped up a role in TV series Varuhuset, which proved to be her public breakthrough. She had previously played a minor role in the film The Inside Man, which turned out to be somewhat of a fiasco and her contribution to the film had gone unnoticed. The success of Varuhuset came with its own share of problems, and she left the series when she felt she was being too closely identified with her character in the series. In 1987, she was hired at the Royal Dramatic Theatre.

In addition to portraying a number of strong, independent female characters in films including Kristin Lavransdotter, Christmas Oratorio and Faithless, she also acted in a number of comedies, including Jävla Kajsa. Formerly married to director Richard Hobert, Endre has worked in many of his films, including Run for your Life, Ögat and Everybody Loves Alice.

Endre and Bergman collaborated on numerous productions. In addition to acting in productions which Bergman had written the scripts for (The Best Intentions, Sunday's Children and Faithless), she was involved with In the Presence of a Clown, which he both wrote and directed. Her first experience working with Bergman on stage was as the farm girl in Long Day's Journey Into Night. She then played Solveig in Peer Gynt, Marie Steuber in The Time and the Room and Elisabeth in Mary Stuart.