Bergman chose one of his own plays for his first production at Malmö City Theatre during his six-year residence. 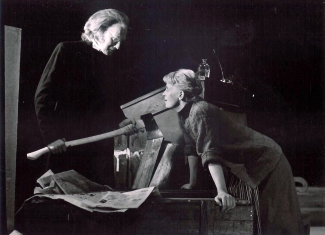 Bergman had been a guest director at Malmö in 1945. Some have suggested that the production of Murder at Barjärna was a kind of test for Bergman before assuming his six-year stay at the Malmö City Theatre.

The play was presented without intermission. On opening night several members of the audience reportedly walked out. The critical consensus was overwhelmingly negative: 'This is probably the only premiere the play will ever have'. The work had been given a great deal of pre-publicity, pointing out its sadistic and sexually provocative content, which was seen by several reviewers as a smokescreen to detract attention from the fact that Bergman's play was a literary disaster.