Neither filmed nor published manuscript about Rebecca, teacher at the Institute for the hearing impaired. 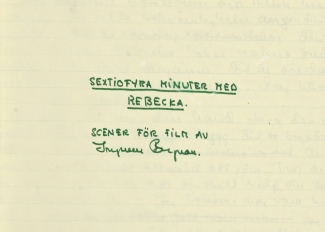 "An adjacent room. In the centre a dimly lit podium. Two naked women perform an obscene pantomime. People are sitting and lying around the walls. The air is acrid from thick smoke. A sweetish oriental music is oozing out from somewhere."
The sex club scene is introduced.

The manuscript has an exciting history. The somewhat odd title, indicating the imagined length of the film, is due to the fact that this would have been Bergman's half of the omnibus film he was about together with Federico Fellini (and, initially, Akira Kurosawa who jettisoned the project early on). No film was made, and as far as we know, Fellini never came up with a script. But so did Bergman, although this hand-written script, together with a typewritten version sent to Mago, are the only known surviving copies.

To whet your appetite a little, the story features obnoxious teenagers, a sex club, lesbians and coca cola.

Handwritings, Idea for a film

Sixty-four Minutes With Rebecka on stage