In June 1964, during the Stockholm Drama and Arts Festival, Bergman presented the world premiere of Swedish poet Harry Martinson's Three Knives from Wei. 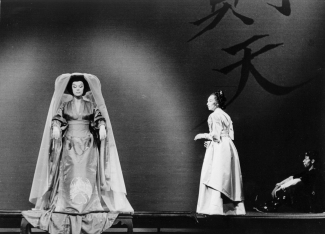 'The most remarkable piece of Swedish theatre I have ever had in my hands.'
Ingmar Bergman

Bergman's production of Martinson's drama in 1964 might be juxtaposed to his staging of Japanese playwright Mishima's Madame de Sade in 1989. Both plays have a predominately female cast and both became visually splendid performances, like courtly masques.

Bergman's production was preceded by months of publicity. Reviewers recognize that the play was a labor of love by Martinson who had been occupied with it for almost a decade, but questioned its dramatic potential. Many suggested that Bergman's role was absolutely crucial in making Martinson's play stage-worthy but considered the production more of a cultural event than a truly memorable theatrical experience. 'The Knives from Wei flashed but left no wounds in the hearts of the audiences.'