Barely a year had passed since Bengt Ekerot's radio version of Bergman's The Day Ends Early when Åke Falck directed Unto My Fear, again for the radio. 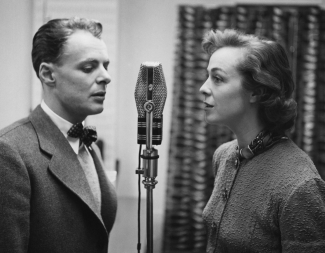 This play premiered at Gothenburg City Theatre in the autumn of 1947. In the programme notes to that production, Bergman wrote an introduction that originally served as a foreword to the play. The young Tobias was revealed to be the author's alter ego. The drama is written as a young man's attempt to come to terms with life's daunting ways, who with the passing of time is transformed from a rosy-cheeked, bright young man into a despicable adult, where faith has been replaced by spiritual vacuousness.