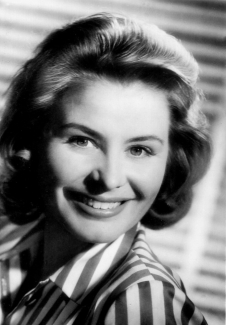 Part of the ensemble at the Royal Dramatic Theatre and a popular star of Swedish cinema in the 1950s, Nilsson played the leading lady in three of Bergman's early films — To Joy, Summer Interlude and Waiting Women.

'The camera catches her with an affection that is easy to comprehend. She embraces the story and lifts it higher with her brilliant mixture of playfulness and seriousness.'
Ingmar Bergman

Maj-Britt Nilsson was born in Stockholm, Sweden, on 11 December 1924, the daughter of Edmund and Augusta Nilsson.

Three years prior to this she had made her film debut in Alf Sjöberg's Resan bort. Nilsson went on to become a popular film star of the 1950s. Highlights of her screen career include three starring roles for Ingmar Bergman and her perfomance in Hasse Ekman's Jazz Boy.

In 1951 she married theatre director Per Gerhard. She left the Royal Dramatic Theatre company in the same year and would appear in a number of major roles at her husband's Vasa theatre up until 1985.