Woman Without a Face 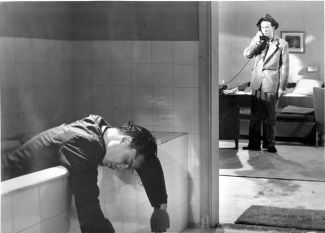 "[...] always inspired, made sparkling by a very youthful genius with all the demons of stage and screen in his blood."
C B-n in Dagens Nyheter

Woman without a Face was the first Bergman screenplay to be filmed by Gustaf Molander, one of Sweden's most industrious ever directors, with seventy films to his credit between 1920 and 1967. Nevertheless, the film was received as if it was a work by Bergman himself.

Ingmar Bergman's Woman without a Face is the work of a poet. Somewhat uneven and erratic on occasions, delightfully immature at times, often raising a question mark. But almost always inspired, made sparkling by a very youthful genius with all the demons of stage and screen in his blood. Ingmar Bergman is of the same ilk as Hjalmar Bergman and Mauritz Stiller. He is the face of film in the 1940s in his generation he shares an affinity with Lars Ahlin and Stig Dagerman, not forgetting Anders Ek.

As a portrayal of people in an exceptional mental state, seriously or chronically disturbed, Woman without a Face is unparalleled in its heated sensitivity. It registers itself swiftly and with vigour, and though Gustaf Molander's remarkably perceptive interpretation of the screenplay, Bergman's personality  a troubled, self-destructive genius, a sparkling dynamo, a rapier-like dexterity, a razor's edge that causes blood to trickle through the scenes  an incomparable display of this cinematic bolt of lightning's repertoire of shocks  one of them, and not the least astounding, is the bizarre gallows humour which breaks though in many of the lines, in film dialogue that Bergman writes more mischievously and expressively than anyone else in the world! And the story's vignettes are irresistible  just think of the chimney-sweep interlude!

'From the sublime to the ridiculous is only one step', Napoleon is reported to have remarked as he marched away from Moscow. Never has one witnessed anyone tripping on that step so many times in two hours as Ingmar Bergman does in this film. Almost as often as Alf Kjellin staggers between his loving wife, the deadly serious Anita Björk, and the Woman of Destiny with a capital W and a capital D, the intoxicatingly lecherous and smirking Gun Wållgren. The sublime in this case was Gun Wållgren, the ridiculous (yet oh so boring) was Anita Björk, because things are so topsy-turvy that one laughs heartlessly at what is most sombre, and in response to the loudest laughter one becomes profoundly serious. If only Ingmar Bergman would realise this, above all understand it! Or if at least he were willing to realise that under no circumstances should he allow a screenplay to be filmed by Molander!